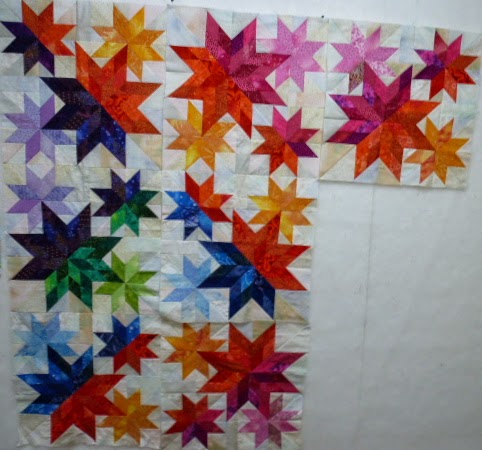 I've still got Meteor Shower a design by Judy Martin, up on my wall. It's grown by a couple of blocks since the last time I took a picture of it to show here. It is a complex design, and requires my brain to be fully focused when working on it. One second of not paying attention, and something ends up turned the wrong way, or a colour in the wrong spot. That means it's going slower than I hoped.This is June's UFO, and my goal was to have all 12 of the large blocks done by the end of the month. given that it's already the 23rd, I don't think that's going to happen. Of course, it didn't help that I spent the first half of the month playing with a new project, rather than working on this. I'll settle for finishing the last 2 of the blocks needed for finishing the center of this quilt.
I have a dinner to go to tonight for the end of the year on the program committee for the guild, so this is going to be a very short post. I'm linking up to Judy's Design Wall Monday, and then I'd better get ready to go.