I can’t seem to put this quilt down. It’s Hand on Your  Heart by Esther Aliu. There is so much variety in this quilt which saves it from being tedious. The worst thing is the small leaves, and I have found a system to get the edges turned and the flaps of the points tucked under on those leaves so that nothing sticks out. . This large flower was fun. I found a fabric that had flowers with large centres in them. The flowers couldn’t be fussy cut, the edges were too jagged. But the centres fit perfectly into this big one. 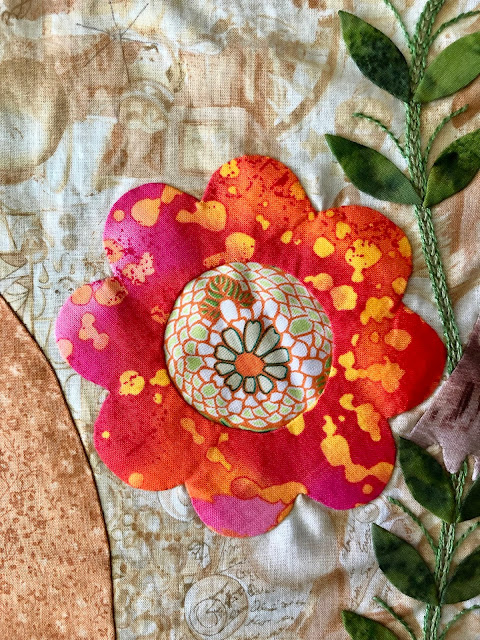 Kinda like a big stylised sunflower or zinnia or dahlia.
And then there’s the bird. I went stash diving because I wanted a subtle brown tinted bird and found this wonderful McKenna Ryan fabric that is actually birch trees. I thought it would make wonderful feather type colour effects. 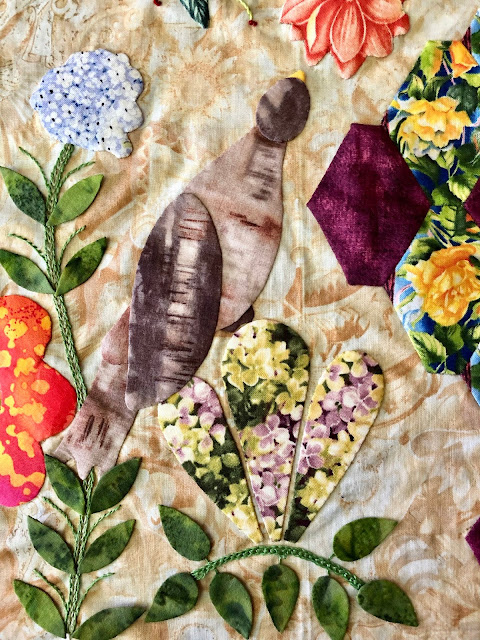 I might have to do some sort of colouring or tinting on the lilac type flower behind the bird to make it stand out more. Here’s the bird in its context. 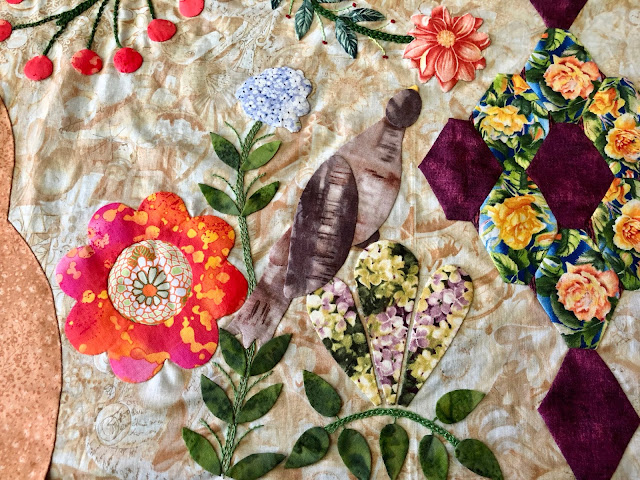 And another shot showing the side of the quilt with the second bird just set in place. Looking at it now, I think I’ll need to do the leaves and flowers that are in close to the centre coming off the bow before I do any more on the right hand scene. It will be too  bulky to hold on to if I don’t. Sometimes it’s a good idea to stand back and look at things to analyze the process. And taking a photo is one of the best ways to be able to stand back and look at something. Especially when living in small spaces. 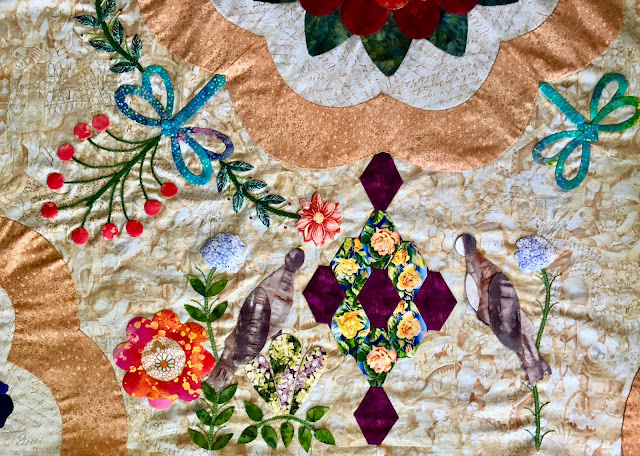 After these bird scenes are done I get to go to the second side of this centre square and do some houses. Which gives lots of opportunities to do some more deep stash diving.
I’m linking up with Kathy’s Slow Sunday Stitching.

Hand on Your Heart Stitching

I’m continuing with my obsession with this quilt. I’m starting to add in the bows and some of the leaves and flowers. 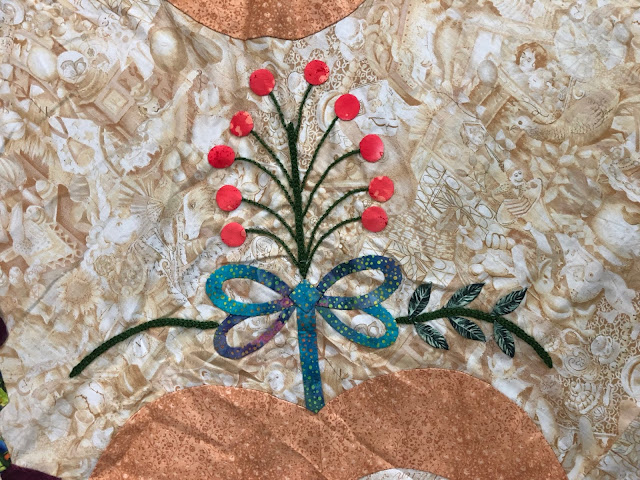 In Esther’s instructions for these flowers and stems she gives an alternate of doing embroidery for the stems rather than bias fabric. She even gave a link to the instructions for the Hungarian Braided Stitch. I’d never seen this stitch before so I went to the link and watched it and decided to use it. It took a few tries but I finally got it and I really like it. The texture in it is great. The size of the final stem can be varied depending on the thickness of the embroidery floss. I wanted a fairly thick stem so I used a thick floss.
I have lots of floral fabrics that are the right scale for the flowers on the end of the stems so I’m trying some fussy cutting. This is a Dahlia, but I think I need to trim off the leaves. They make the motif too big to fit in with the other things that will be going on. Plus they don’t fit with the leaves coming off the stems. 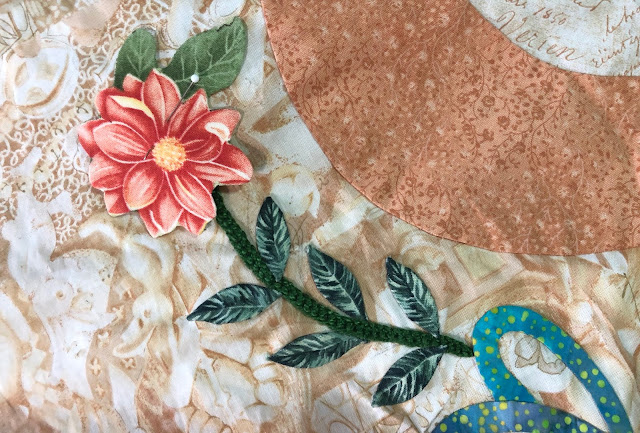 I love the depth the flower gives without all the work of building it up petal by petal. Here’s a big shot showing what Is finished so far, minus the flower. There are four of these bow designs that go around the centre of the quilt. I’m thinking right now of using different flower heads on each one of them. But that decision will wait until I get to each of them since I’m working one section at a time rather than doing all of the bow units at once. 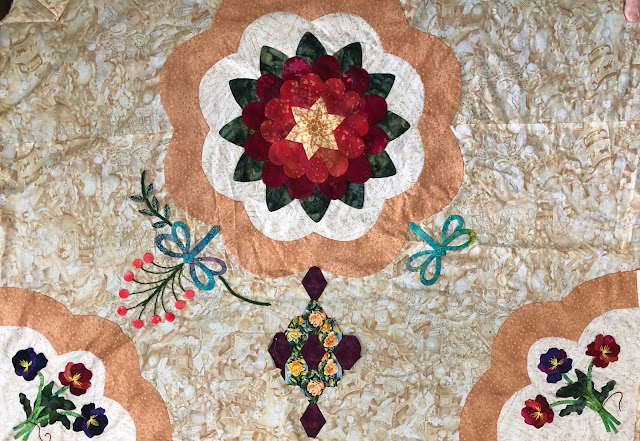 There are months to go before this comes anywhere close to being finished but it has revived my love of appliqué.
I’m linking up to Kathy’s Slow Sunday Stitching and then I think I’ll trim off those leaves and get that flower in place. 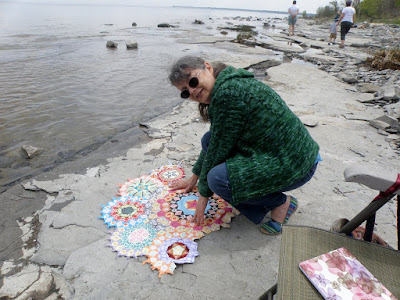 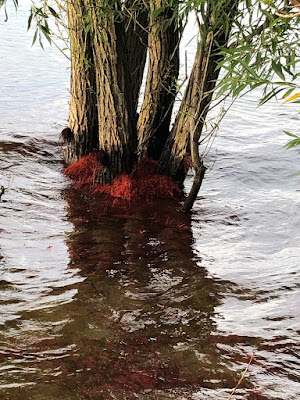 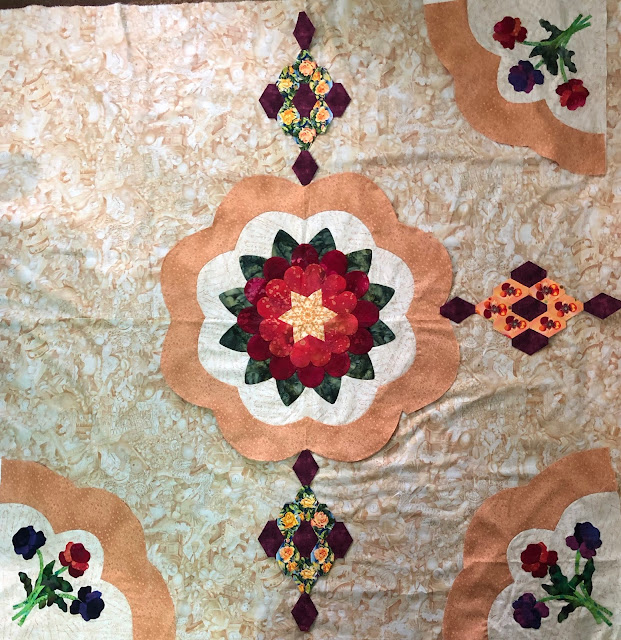 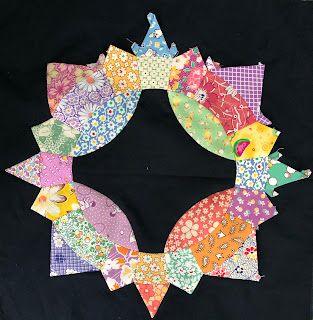