I got a little more stitching done this week on the Noah’s Journey BOM. I’m about halfway through the last of this month’s stitcheries - the very cute pigs. 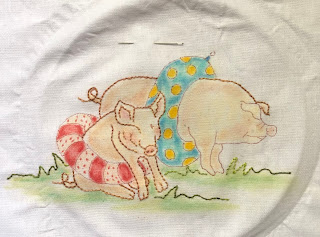 I’m also slowly continuing to work on Abbie’s sweater. I’ve started the second sleeve. However, I got a bit side tracked. I have new yarn sitting here waiting for a new sweater start. While talking with Gail one evening last week on FaceTime, I started digging around in my various baskets looking for the 2.25mm needles and the short cable that I use when casting on and doing necklines in the round, thinking that I would cast on for the new sweater. While digging in one of those baskets I found a sweater that I’d started last winter and had almost finished. There was about an inch left on the second sleeve and the ribbing to do before it could be counted as finished. I’d totally forgotten about it. So, instead of finishing Abbie’s sleeve, I finished up on that sweater. It’s a pattern called Grenadine. 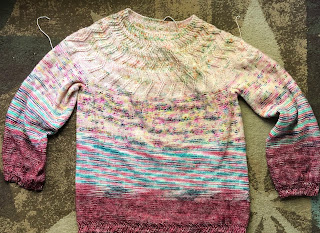 I have a few ends left to weave in and it will be ready to wear. The colour fades on this project didn’t work as well as some of the others I’ve done. But it is still soft and warm and cozy to wear and will work quite well for casual kicking around and being comfortable while staying home and not going anywhere.

I’m going to link up to Kathy’s Slow Sunday Stitching and then do some more on Abbie’s sweater. If I put it off too much longer it won’t fit her. As it is I think I am going to have to get creative and add some length to it. I think it is already too short but it’s hard to tell while it is in pieces.

I haven’t been doing a lot of stitching this past week. I’m too tired by the evening to focus. I’ve been working a little bit on Abbie’s Paw Patrol sweater but it isn’t all that interesting at the moment for photo shoot purposes. The back and the 2 fronts are finished. One sleeve is to the decrease portion of the top of the sleeve and the other is yet to be started. I much prefer doing seamless in the round type sweaters than those that are done in pieces. I’m doing the Skye version of the sweater, a picture of which can be found here. 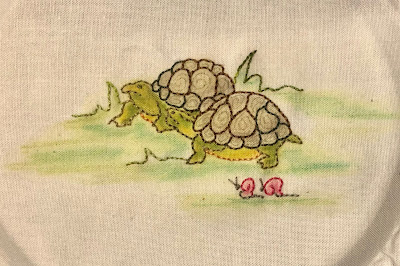 I’ve started The grass under the geese. 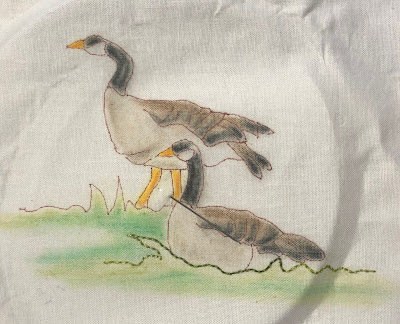 I’m leaving the pigs until last, just because they are so cute. 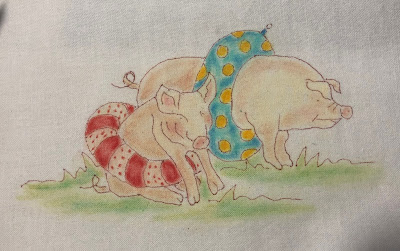 I’ll link up to Kathy’s Slow Sunday Stitching and perhaps at least finish that first sleeve.

First off I want to wish everyone in Canada who may be celebrating thanksgiving this weekend a very happy and safe one. We have scaled way back and are only meeing with the people here in the house. I am continually thankful for our happy multi generation household here.

I have 2 slow finishes this week. I participated in Casapinka’s mystery knit along that began a couple of months ago now. It had 6 sections of clues all written from the perspective of one of her cats, named Sharon. It was so much fun to do, not only because of the wide variety of stitches but also because of the way it was written. It’s hard to tell the size of it from the picture.

It blocked out to 20 inches wide by about 72 inches long. Wide enough and long enough to make a nice shoulder wrap type shawl.

The second finish is the second block of the Noah’s Journey BOM by Crabapple Hill. 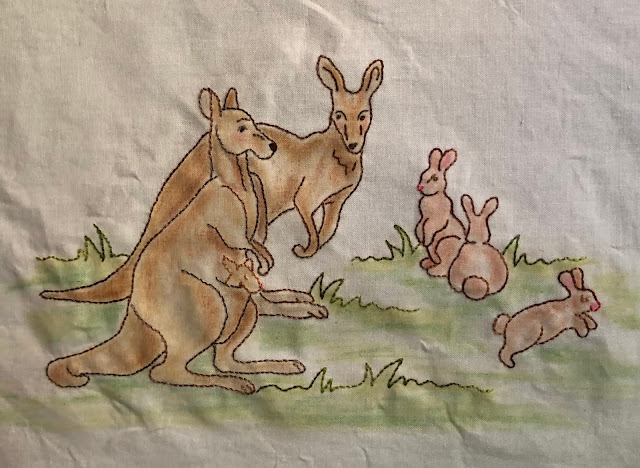 The third block has been released. I have it all coloured and the colour fixative applied. It is drying now before it gets heat set and I can start stitching on it.

In the meantime I started a new embroidery project since I know the smaller ones from the Noah’s Journey BOM will only take a week or two. I am on a quest to make myself some seasonal pillows. I have one for spring/summer and one for Christmas so I decided I needed one for fall. Actually, I should clarify that statement to say that those stitcheries are finished. The actual pillows have yet to be constructed out of them. I found a lovely colouring page that I transferred over to fabric and then coloured in. I’ve started the outline stitching. The apples, pear and peach are finished. 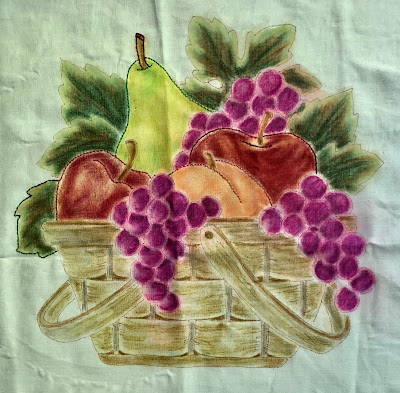 I’m also working on a little Paw Patrol sweater for our grand daughter, found here on Ravelry. It’s still in pieces so there isn’t much to take a picture of as yet. And if that isn’t enough, I indulged and bought myself some more yarn. I love Casapinka’s designs and while working on the mystery found another sweater design of hers that I fell for. It’s called The Night Forest. These are the colours I’ve chosen. 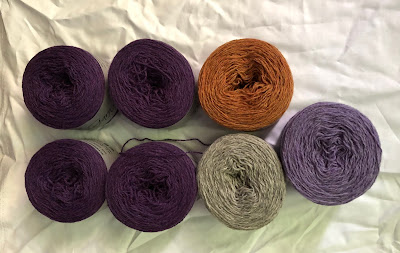 Close but not exactly the same as the designer’s.  I love the dark purple. I’ve done the tension swatch but past that I have promised myself that I will get Abbie’s sweater done first. So with that in mind, I will post this, link up to Kathy’s Slow Sunday Stitching and then get back to working on Abbie’s sweater.