End of year round up.

I hadn’t planned on doing one of these because I had it in my head that I hadn’t accomplished much to report about. But out of curiosity I browsed back through the year’s blog posts just to check and see exactly what did happen. And to my surprise I finished a lot more that I thought I had. The finishes are a lot heavier in the knitting end of things than the quilting. I don’t have pictures of everything though. I’ll start with the knitting finishes:

Those numbers completely blow me away. I had no idea there were that many until I started looking through the blog posts talking about them and then looking at my Ravelry account to actually see what projects were listed there.  There are also a couple of pairs of socks that are waiting to have their toes grafted and a blanket that needs a few more inches done.

Back at the beginning of the year I did a post about what I’d like to get done. It was mostly about quilt tops that needed to be quilted and finished. Again, I didn’t think I’d gotten that much done, but no, there was more accomplished than I thought. There were 6 quilts listed that I wanted to get finished. Of those 6, two are now done.
The one I wanted to finish most of all was the Round Robin quilt that was the oldest of all my finished tops. It is done. The lighting in the house isn’t the greatest which means the quilting doesn’t show very well in the photos. 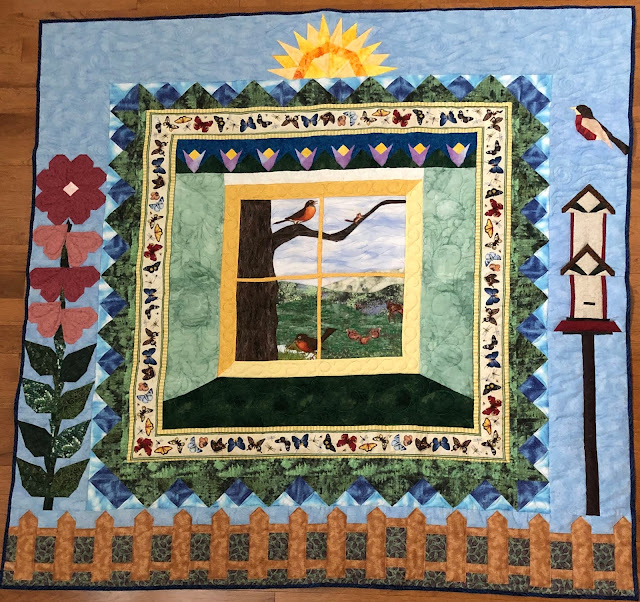 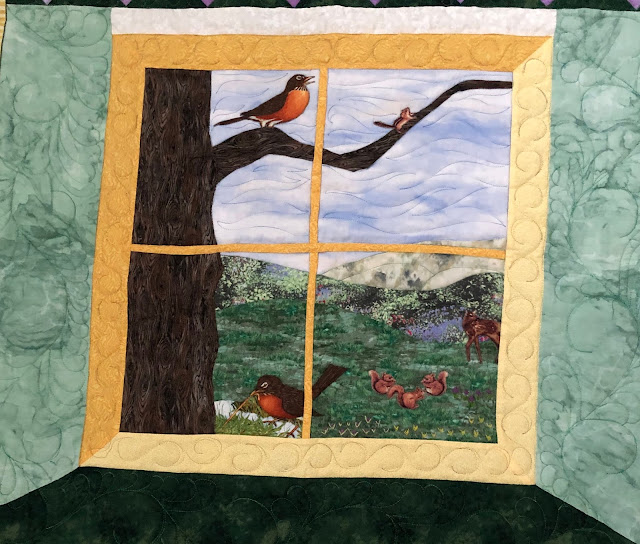 And Three of a Kind also is finished. This quilt is so big I had to fold it in quarters in order to get a picture. 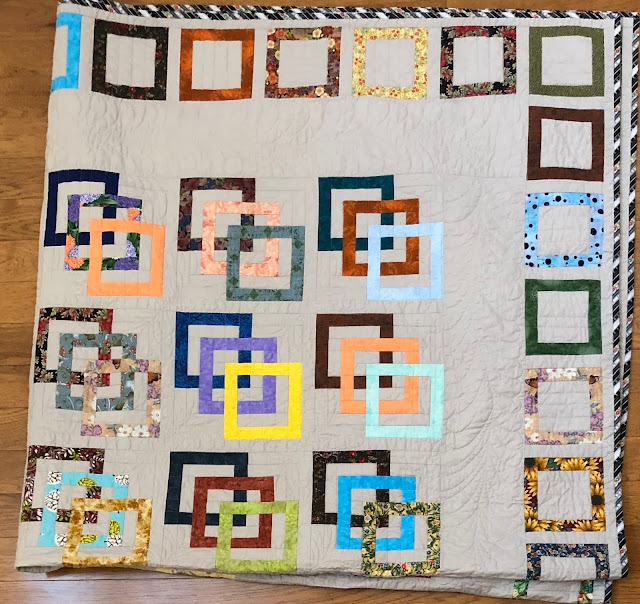 The hold up on both of those was not knowing how to quilt them. Once they were loaded onto the machine the decisions were easy. Lesson learned.... just load them and they will tell me what they want. I have four more still to do. I haven’t added any more finished quilt tops to that list. Not on that beginning of the year list were a couple of other finishes. 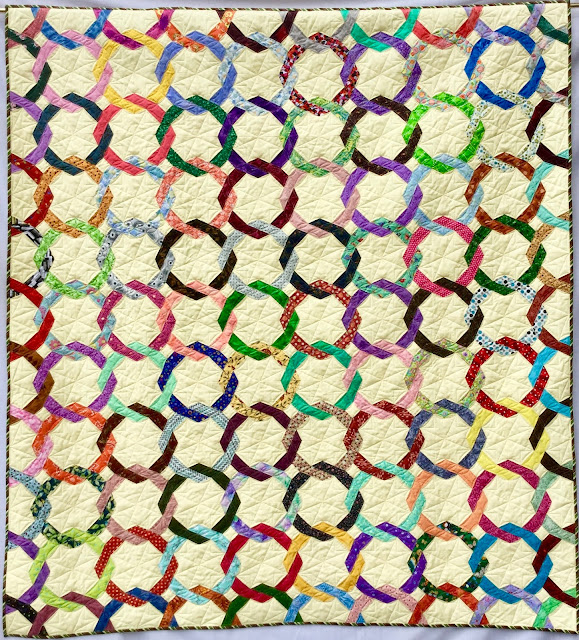 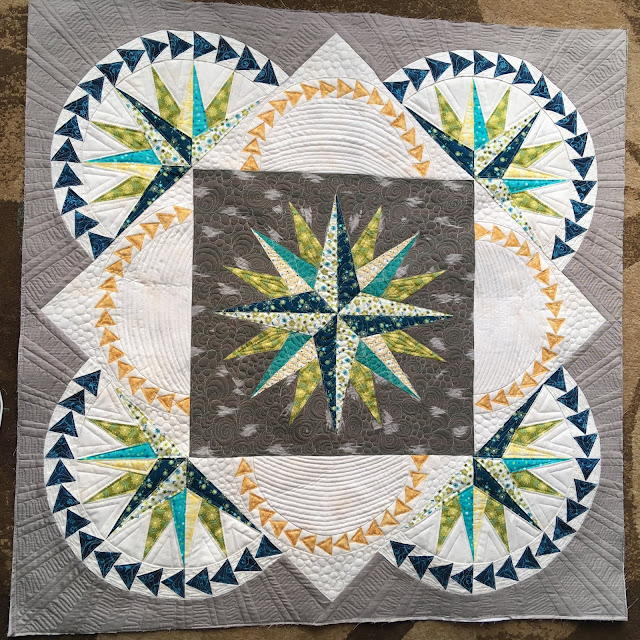 I also did a baby quilt. 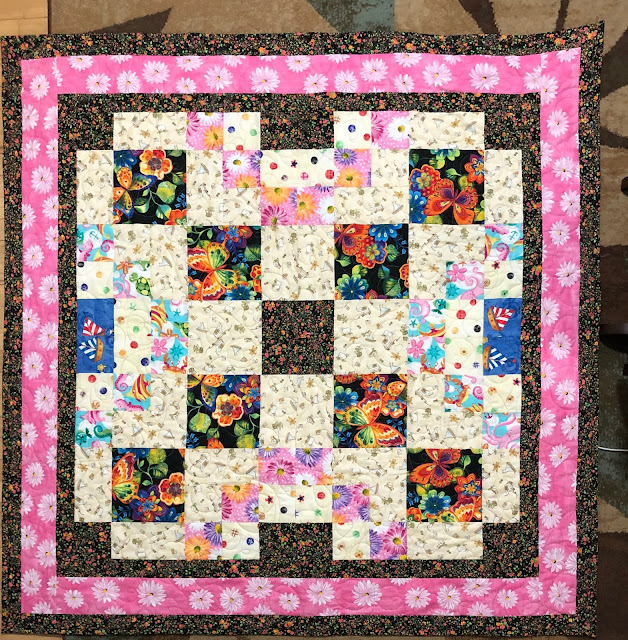 So there were five total quilt finishes. I seem to have spent most of the last few years doing hand piecing using English Paper Piecing. Making that baby quilt brought back the enjoyment of machine piecing. So at the end of November I started a quilt that had been on my bucket list for a while now. Judy Martin’s Pioneer Log Cabin. 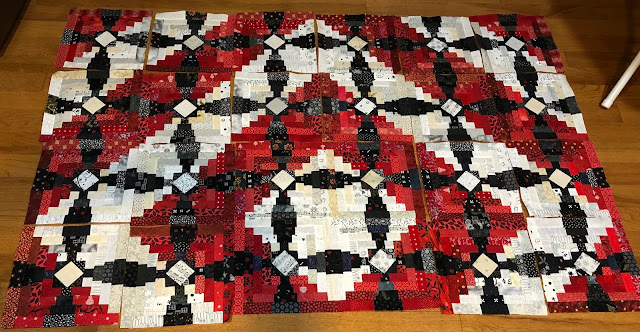 I am loving doing this! It may even get finished before the end of this week. I have 12 more blocks to do for the centre and then 28 border blocks to do.

So, that was my year full of finishes that I didn’t know I’d finished. I am so glad I blog, although it has been very sporadic. If it weren’t for this blog, I’d have no idea just what I’d been up to all year.

I’ve made some progress on Hold Onto Your Heart this past week. The embroidered stems are done and the leaves are all prepared and glue basted down. There is still a flower to place on top of the stem on the right but I haven’t decided on the colour it will be yet. 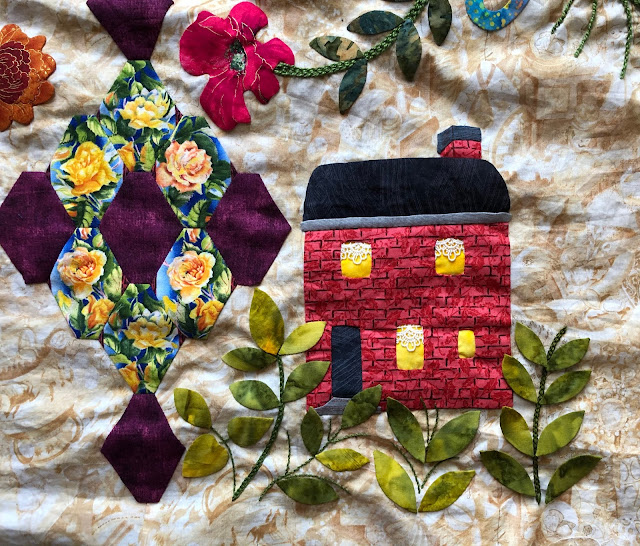 It will have three rows of petals. Right now I’m leaning towards 3 shades of purples.
I’ve also started piecing on a new quilt by my favourite designer Judy Martin. This one is from her book on Log cabin quilts. I love the secondary design formed by the pieced logs. 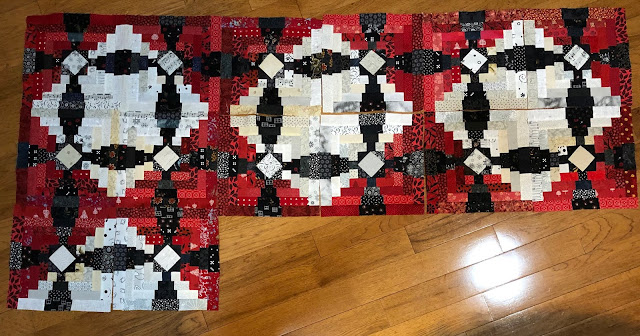 I have six more blocks than this done now, but don’t have a picture. The blocks are 12 inches finished with the individual logs finishing at 1 inch. I’ll be doing 36 blocks, so I’m over half way there. The cutting and piecing, like most of Judy Martin’s quilts, is quite time consuming and intense but I’m enjoying the process. I’m doing 4 at a time and trying to get a good mix of fabrics in each block. I’m linking up to Kathy’s Slow Sunday Stitching.

Labels: Hold Onto Your Heart, HOYH

I have a slow stitching, or make that slow knitting, finish this week The pattern is called Canyon Road. I have fallen in love with this persons patterns and have happily fallen into the rabbit hole of colour work sweaters. 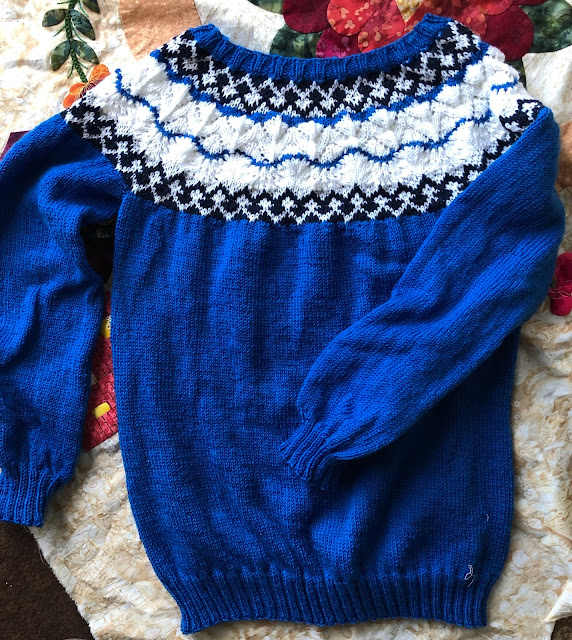 It still needs to be blocked. After it is blocked the lace and colour work around the yoke will be even prettier. 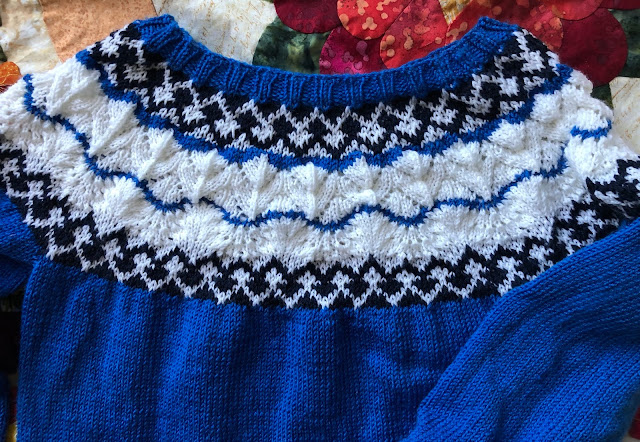 I have some yarn left from this one, but of course it wasn’t enough to do a full sweater so of course I had to order more yarn. And then after I ordered the yarn to make up the difference so I could make another sweater, I got a notification that I had reached a milestone and therefore had a $25.00 store credit. Which meant, you guessed it, I ordered yet more yarn. With the yarn I already have here and the yarn that is coming I figure I have enough to do 5 more sweaters. And that’s not counting all the leftovers from all the other projects. Yep, I’m building a whole second stash, with yarn instead of fabric.
In between the knitting I’ve been working on my Hold Onto Your Heart design by Esther Aliu. I’m working on the houses and the foliage surrounding them. 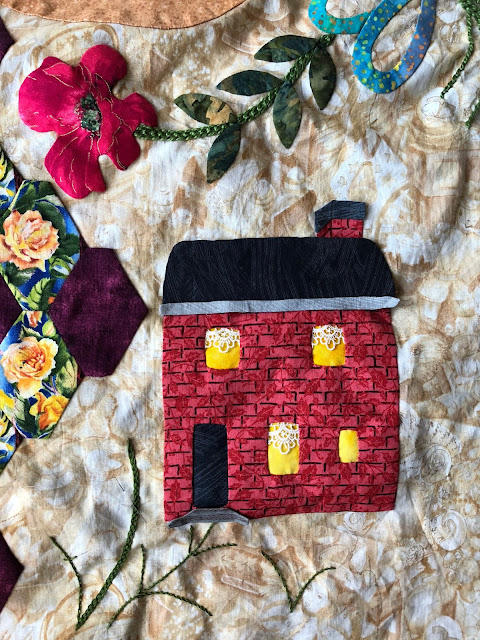 Her design for the houses had shutters by the windows. I’ve left those off and have instead added some lace trim inside the windows for curtains. I’m doing embroidery for the stems of the foliage rather than using bias fabric. This afternoons job is to prepare the leaves and get them glue basted in place. And maybe get some more of the stems done.

I’m linking up to Kathy’s Slow Sunday Stitching.
Posted by Cathy at 16:01 5 comments: