I have gotten two small hand piecing projects to the finished top stage. On Sunday, I posted that I’d gotten Orion’s Belt finished, except for should I add borders. The verdict was unanimous for yes, so today I added on the narrow black border. 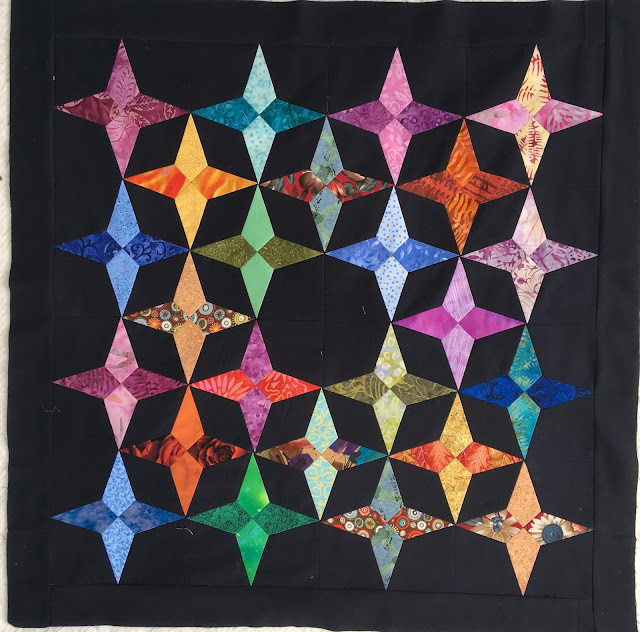 Once it’s quilted, I’ll probably trim it back a bit.
And since I was on an add borders roll, I decided to add them to Castor and Pollux as well. 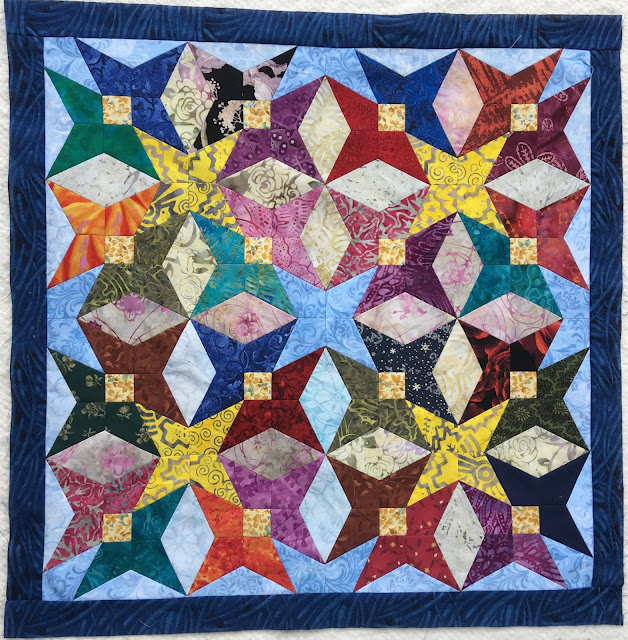 Both of these are English Paper Piecing small wall hangings. But they could certainly be enlarged to any size. If anyone is interested in the papers or the acrylic templates for these projects, they will be available in our online store, once it is launched in the next month, or so. If you want them sooner, email me at caleeshepherd@gmail.com and we can make arrangements from there.
I’m going to link up to The Needle and Thread Network and also to Sew Fresh Quilts and finally to Crazy Mom Quilts Finish it Friday.

I have finished the hand stitching on Orion’s Belt. Woohoo, yippee and happy dance! I love all the bright scrappy colours in this one. Now, I have a question.... does it need a narrow border of the black to finish it off or is it finished the way it is? What do you think? 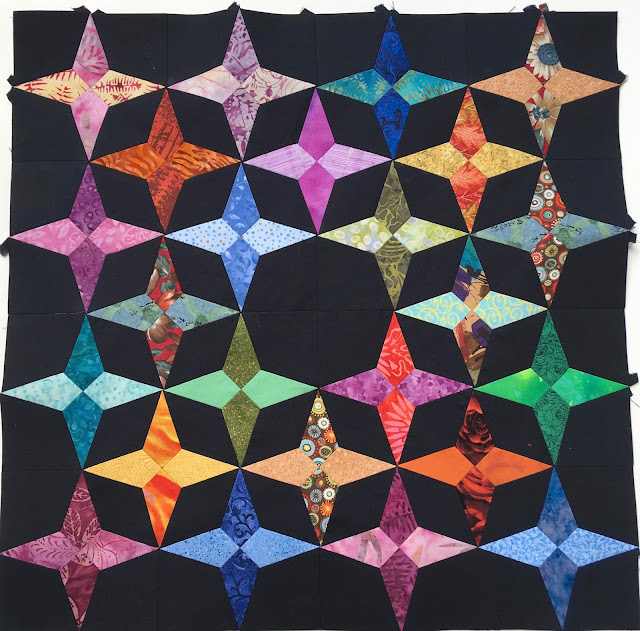 Once we have our web site up and running, hopefully within the month, the pattern for this, along with the papers and the acrylic templates will be available for sale. In the meantime, I am going to start another one, again using the kites. This one has a very strong secondary pattern to it, which I think will be fun once there is more than one block together. 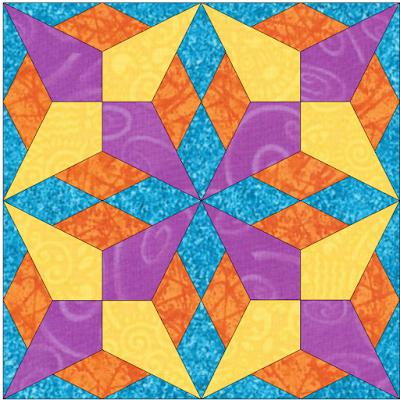 I have to get it drawn up in Corel Draw and then cut before I can do much on it. Although, thinking of it now, I still have lots of kite papers left from doing the others, so I could get started on that  part of it. I love the  colours in the Electric Quilt drawing, so I’m hoping there is something in my stash that is close to it.
I’m linking up to Kathy’s Slow Sunday Stitching, and then I’m going to go stash diving to see if I can find some fabrics that  work.

I’m back to work on quilting. I’m managing an hour or two a day, which isn’t great, but it’s getting better after that horrible bout of illness. I loaded a quilt for Maria today. She wanted a feather meander in the body of the quilt and feathers in the border as well. It’s been quite a while since I had to opportunity to do feathers on a quilt. 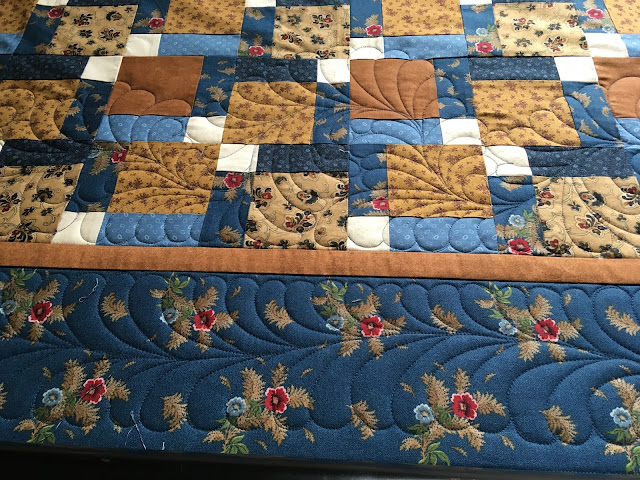 I’m hoping to have it done by the end of the week. It feels so good to be getting back to what I love to do.

We spent the past long weekend camping with family. It was our grandson Avery’s 6th birthday. We went to Sauble Falls Provincial Park. There is some wonderful hiking and scenery to be seen there. 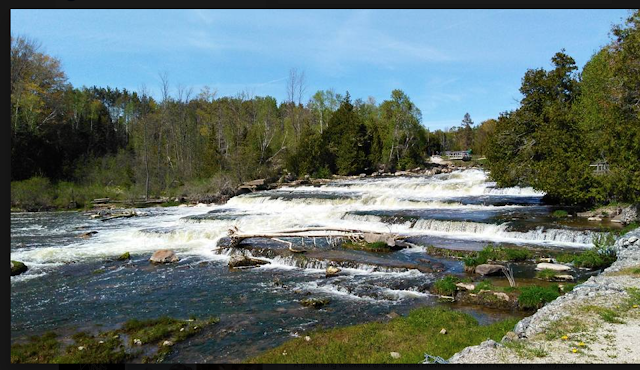 I’m so glad we were able to get away and do some quality family bonding time. And when, as it was on Sunday, it’s cold and wet outside, and there are 6 adults, 2 children and one dog inside a 21 foot trailer, it is most definitely family bonding time! (grin)

Back after a long break

It’s been over a month since I’ve had the chance to write up a blog post. Half of that time was spent with a really really nasty case of a blocked bile duct, which ended up with an hospital stay of ten days, after two very nasty emergency room visits. I am so very grateful for our health care in this country. I think it ranks one of the best in the world. However, it has one large flaw..... emergency rooms are backed up and packed to the limits. I spent over five hours in pain and retching, laying out on a couch in the emergency room waiting room, before getting in to be seen. After that though, the care and the speed in which things were looked after was fine.
I was discharged from hospital April 29th, and I’m just now beginning to get back to something close to normal. I still don’t have the energy or stamina to be able to get things done, but it’s coming. Needless to say, I have no desire to EVER repeat that experience. The true measure of just how sick I was is found in the fact that there were three weeks during which there was no needle, thread or fabric even touched.
About a week ago I started back in working on Orion’s Belt. I would love to get this done because there are so many more designs using this kite shape floating around in my brain, itching to get out. 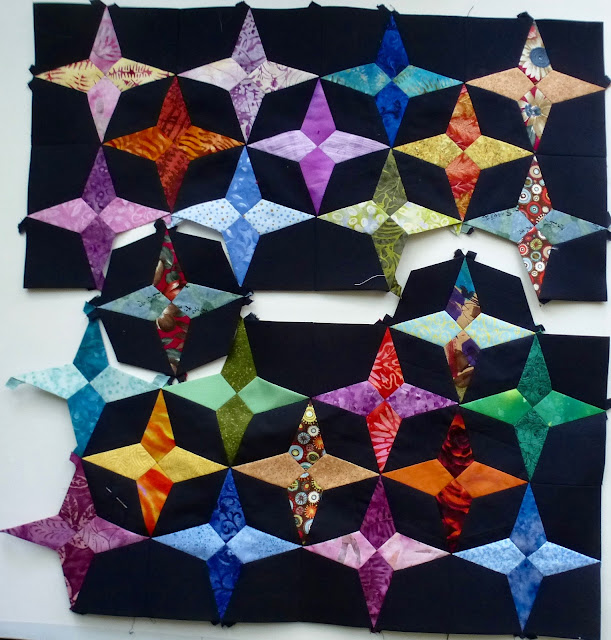 We’re heading out for our first camping trip of the year this weekend. It’s our grandson’s 6th birthday today. He’s going to be coming camping with us, so we’ll celebrate with him then. 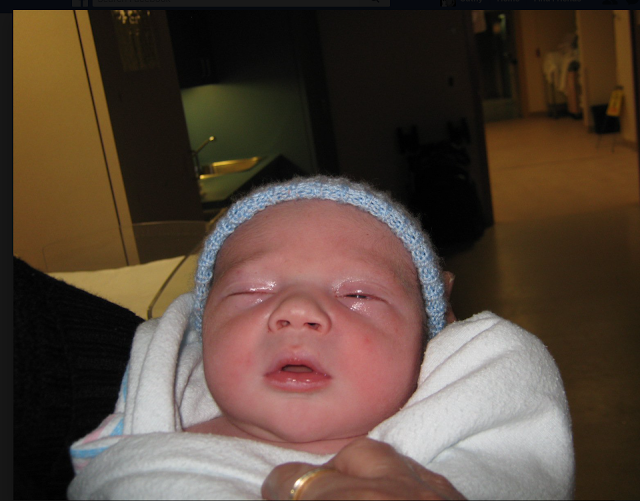 It’s so hard to believe it’s been six years already. It seems like only a week or two. It has been so much fun watching him grow, finding out the person that he’s becoming. So far, he is very much his Daddy’s son, both in looks and also in temperament and behaviours. It’s like watching our son grow up all over again.
We’re getting to spend some extra time with our grand daughter this week. Her baby sitter is sick, so we are filling in. What a joy she is, even if she is trying my currently limited energy reserves. Scott’s been doing the majority of care and chasing, and he’s so very good at it. 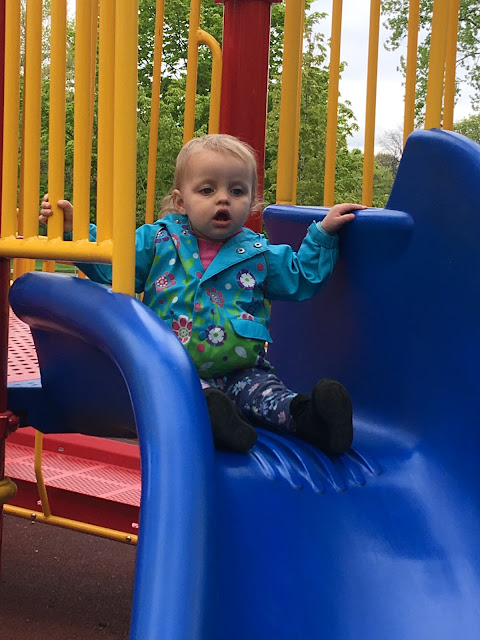 What makes her even so much more fun is that, as much as our grandson is so much like our son, our grand daughter is every bit as much like our daughter. It’s like we’re able to enjoy both our children all over again, only better, because we can spend so much more time enjoying them, rather than the every day things that seem to be so overwhelming as a parent. I’ve heard it said so many times, and that’s because it is so true..... being a grand parent is the best thing ever!
I’m going to link up to Lorna’s Let’s Bee Social and then maybe get a bit more hand stitching done on Orion’s Belt before this little girl wakes up from her nap.