Last year the London Friendship Quilters Guild held a class for the wall hanging Mexican Stars. I had three of them come into my studio in the past month, or so, to have the quilting done. This has to be the part of this job I like the best, seeing the same pattern done in such different ways, and choosing the quilting to compliment them. All of the photos have been left at the big file size, if you want to see more detail by clicking on them. 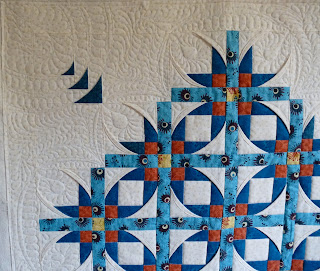 The first is Christine's. She didn't really have any idea for what she wanted, except that she wanted the curved areas emphasized. So I quilted in some arcs to reflect the arcs in the curved areas, and then emphasized those arcs with some pebbles. The piecing was emphasized with stitch in the ditch, and the background areas filled with feathers. I tried doing a quilting motif in the sashings of the piecing, but the quilt yelled at me very loudly that it didn't want that. So I ripped it out, and left the piecing to shine on it's own. I took this quilt's advice, and did the same on the other 2, as well. 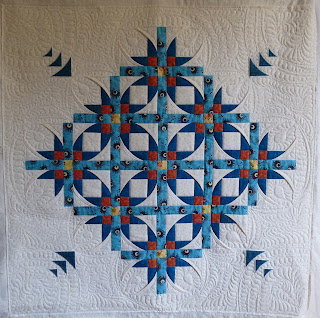 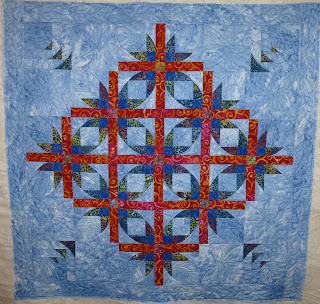 Then there came Gail's. She had a fairly good idea of what she wanted. She requested flower shapes in the empty background squares, and leaf shapes around the edges and in the open areas of the piecing. I threw in some swirls into the leaves just to give it a vine-y feel. The piecing got  stitch in the ditch in order to highlight the piecing. I don't have any close up of this one, but Gail wrote about it with more pictures on her blog  The Cozy Quilter . 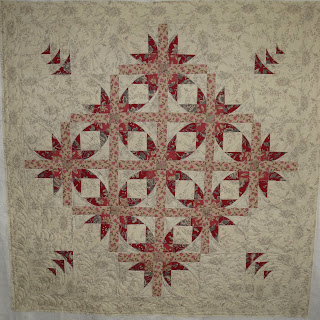 And then there was Karen's. Hers is all about feathers. They come in from the four outer corners, and twine around to fill all the background spaces. The piecing in this one is also stitched in the ditch, also to let the piecing shine. These three quilts were a lot of fun, and also a challenge, to quilt. I love how they are all the same pattern, but the fabric choices made them look so different. I am honoured that they trusted me with them. 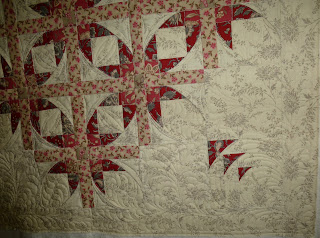