I've set aside posting about stockings for a while, as I can't show pics of it because I'm now working on Laurie's. But, I started a new stitchery project this past week. I have been drooling over this project since it first came out in January. It is called Promises and Borders and it is a stitchery block of the month that will eventually finish into a wall hanging. I hadn't started it earlier in the year because of wanting to focus on the Christmas stockings that I wanted to have done by this Christmas. Well, 3 out of 4 of them are done, and the 4th is about 30% done, so I figure I can start something else. 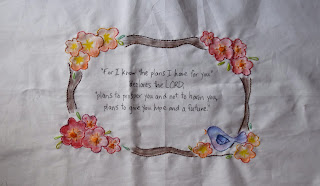 Earlier this week Denise did a post about an owl stitchery she was working on, where she was using coloured pencils to add to the stitchery, and I had an "aha" moment. So, I got out my own coloured pencils and started doing some shading into the stitched areas. I love the added depth the shading gives it. I still have a little bit of stitching left to do in the center of the orange flowers, and then I can add the textile medium over top of the coloured pencils, and I can count the stitchery on this square done, and then go on to block #2.
And now, I get to add up all the numbers from all the projects I've been working on this past week. 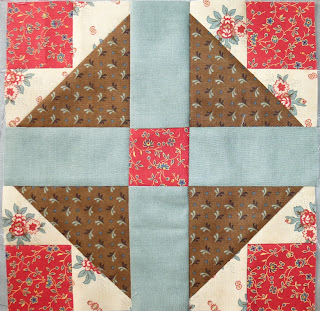 The theme of the whole quilt is Grandmother's Choice and it will follow the history of the fight for the right to vote for women that took place in the early years of the last century. Did you know  that women in Canada didn't get the full right to vote until 1919? Women in Quebec, according to Wikipedia, didn't get that right until 1940! In the USA, the right to vote came in 1920. So, we've had this precious right to have a say in what goes on in the government of our countries for less than 100 years!! Every week, along with a block, there is going to be a bit of history about the fight for this right. I am an history nut, and love finding out the history of various times and countries. I am also, as everyone knows by now, a quilt nut, so what could be better than to combine the 2? I am going to try really hard to keep up with this one.
I'm linking up to Judy's Patchwork Times for the stash report and Kathy's Quilts for the stitchery report.
Posted by Cathy at 11:58