More pictures of Avery, our Grandson...... 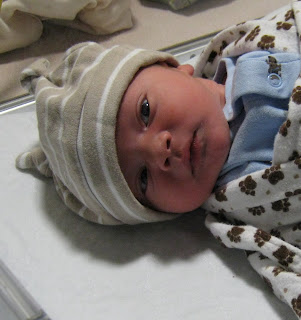 Wow, does that ever sound good...... Grandson. And to be able to say it about an actual person, who is here, rather than expected, is even better. Yes, I know, everyone who is a grandparent has told me how fabulous it is. But it is another one of those things that has to be experienced, to really know. Laurie and Noel have been fabulous with him, relaxed, as if they've been doing this forever, rather than it being their first child. So far, he is an extremely mellow baby, and we are all hoping and praying that he remains that way once he comes home.  And, how can I talk about our grandson, without pictures. It is a guarantee that I am going to drive everyone absolutely nuts, and have a fabulous time doing it. LOL. I don't have any pictures of Laurie with him, though. A situation that I am going to have to change, maybe tomorrow before we head back home. Now that is going to be difficult. We'll be back in a little over a week, to spend a week camping at a park that is only 10 minutes away from them. And our work schedules have a 4 day weekend once a month, that we can use to come and visit. But it is going to be difficult to be that far away from them. Babies change so much, so fast, and we'll miss big chunks of it. But, I am grateful that he is here, that he is healthy, and that they are only 4 hours away, not 4 days away, on the other side of the country. That would be one way to guarantee that we would finally get on to an airplane. LOL 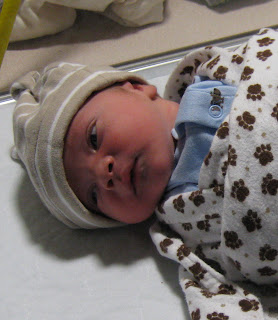 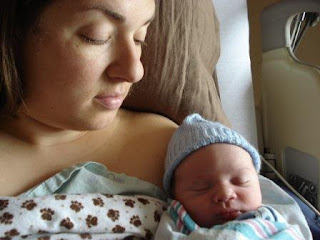 Edit: I do have a picture of Laurie with the baby. Here she is, the beautiful mother:
Posted by Cathy at 21:55 5 comments: 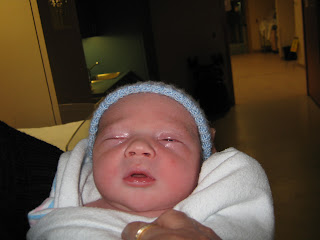 He is here!!!!!!! Our grandson, named Avery. He was born this morning at 6:59, weighing in at 8 pounds, seven ounces. He is beautiful and we are thrilled. No more for now. We've been awake for over 24 hours, and it is time for some sleep. More details later. 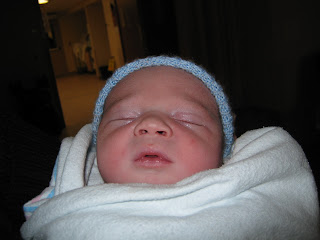 We are still waiting on our grandson to decide that he is going to make an appearance. The OB doctor tried an induction last week, that didn't work, so they sent her home. Quite the roller coaster ride those few days were. LOL. More so for Laurie than for us. There is going to be another attempt at induction starting tonight, so we will all be praying that this time works. I'll be calling Noel on Monday morning, and depending on what he says, we'll be heading up to the hospital to wait for this little boy to be born. While I've been impatiently waiting, (although there is no possible way I could be more anxious and impatient for this baby to be born than Laurie is, poor girl), I've decided I would play before going in to work. I've done a lot of cutting and sewing of strips for the Bear Tracks quilts, and have finally cracked the 60 yards used mark. Depending on the news tomorrow, there might, or might not, be a picture for design wall Monday.

So, on to the numbers:

To see how others are managing their stashes, go on over to Judy's Patchwork Times
Posted by Cathy at 13:38 2 comments: 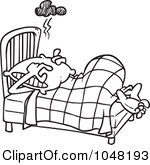 Have you ever had one of those days where you would have been a whole lot better off if you had stayed in bed? I had one of those today. It all started with the thought that we needed to get as many errands as possible done today, since we were thinking there might be a baby coming in the next day or 2. We had a check from the insurance company that needed to go into the bank, so that we could pay the dentist. So, I decided that I would keep the car, drive Scott to work and then hit the bank, etc. Did that, went to the dentist office, but rather than park in the paid parking lot at the dentist office, I parked across the street at the McDonalds, since I was planning on having a burger there. Did that, paid the dentist, had a burger, went out, got in the car, backed out of the parking space, straight into the passenger's side of the car behind me. No one hurt, her car had a dent and multiple scratches, ours was not affected at all. Guess there are some advantages to driving a big gas guzzling SUV. But it was all highly embarrassing. And I have no excuse. I simply didn't see her. So, instead of coming home, there was a trip to our local accident reporting centre. Except that didn't go right either. I didn't know exactly where it was, so I programmed the address into my GPS thing. And it took us, she was following me, to the wrong place. This GPS voice announced that we had arrived at destination, when there was nothing even remotely looking like a police reporting station there. So I got out of the car, explained to the poor woman whose car I hit that my GPS took us to the wrong place. She already had a low opinion of my intelligence and I don't think this helped at all. So I went to the nearest open business, and asked if they knew where the police reporting place was. Turned out to be one street north of where we were. The guy in the business was really friendly, and he had this cool thing on his computer that actually was able to show the street view of the reporting place. No problems with the reporting of the accident, other than the major embarrassment of feeling like a complete idiot. Got in the car, drove nervously home, and decided to do some work on a customer quilt. It had been giving me trouble yesterday with thread breakages, so I put some sewers' ease stuff on the thread, and the thread breakage stopped. I checked the tension after the first couple of inches, and it looked good, so I kept going. Finished that row, did another, checked the back, and promptly found out that the thread had been too well lubricated, and the tension was way too loose. So, I've spent the last 2 hours ripping it all back out.  That's it, I'm done, I'm not doing anything else today. I'm going to sit her, do some blog surfing, maybe chat with Susan on facebook, if she's on, and watch some mindless. TV. Oh, and that baby that was going to be induced this week? He is doing very well right where he is, so the OB is leaving things for another week, if she doesn't go on her own, first. So the running around that I did today, didn't need to be done today. (sigh) I should have stayed in bed. LOL
Posted by Cathy at 21:52 6 comments: 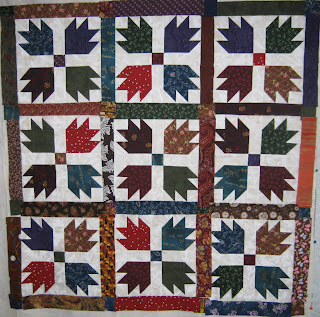 Today's most important task is done. We went and voted. Now all we can do is wait and see what the Canadian people have decided about our government. We'll be watching the news coverage tonight to follow along, and see what kind of government we are going to have for the near future, at least. If it's another minority, it's any one's guess what will be in place a year from now. Anyway....... on to the fun stuff. I haven't made a lot of progress in the last couple of days on this Bear Tracks quilt. I need 13 of the bear paw blocks, and I so far have 9. Each of the blocks gets surrounded by sashing, but this picture gives an idea of the colours. I must say I'm liking it. I'm going to spend the rest of today working on this, and then watch the election coverage later tonight. Tomorrow I go back to making some more diapers. I've really enjoyed being able to make them. It's a really nice thought that every time he is put into one of the cloth diapers, he'll be wrapped in his grammy's love. He should be making his appearance sometime within the next 2 weeks. Laurie's OB is talking about maybe inducing her next week. So very, very EXCITING!!!!!!!! If you are interested in more design walls, full of inspiration and eye candy, go on over to Patchwork Times
Posted by Cathy at 15:09 4 comments:

I finished a UFO this week, and started a new project, so there are some numbers to report.

So close to breaking the 60 yards used point. If I keep going with the new project, (pics tomorrow), I should be able to break that 60 yards used mark. Woohoo! I would love to be able to wipe out that positive balance by the end of June. I don't know if I can do it, though. Especially because Quilt Canada is coming to my town in May, and there will be a merchant's mall, where I am sure there will be yardage added numbers. But, it's a good loose goal to have. Go on over to Patchwork Times if you want to see some more stash reports. Judy has pulled this month's UFO number 9, which is my disappearing 9 patch. That's a good one, since the blocks are all made, and just need to be sewn together. On the down side, I won't be able to count it as stash used, since I count as I make components for quilts, and these are all made. There might be borders I can count on them, though.
Posted by Cathy at 12:24 3 comments: