I'm doing the Grandmother's Choice Block of the week, and I must confess to a few groans, and at least one "oh no!!" when I saw this week's block. It is most certainly not an easy one, and the thoughts of machine piecing all the "Y" seams and handling all the teeny pieces through the machine gave me a few shudders. However, once I calmed down a bit, I decided it would be a block that I would piece by hand. I traced out all the pieces onto fabrics and took them with me to work last night, to work on during breaks. 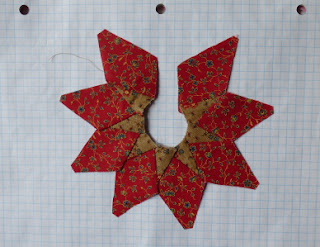 The first round of pieces is almost done. If I take it to work and do the same thing tonight, It should have this round, and most of the second added to it. The other hand piece I'm working on is the second of the Promises and Borders. I didn't get a lot done on it, but it is coming. I don't have a deadline for this, so slow and steady is OK. 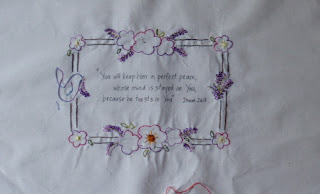 I think all that is left to do on it is to do the flower centers, and then colour it in, and to put the textile medium over the coloured pencil, once I get the colouring done. And looking at it now, I've noticed that the bird's wing isn't finished.

There has been some movement in my stash, too. I've loaded my Heartland Star onto the machine, in the hopes of having it done in time for the quilt show at the end of October.