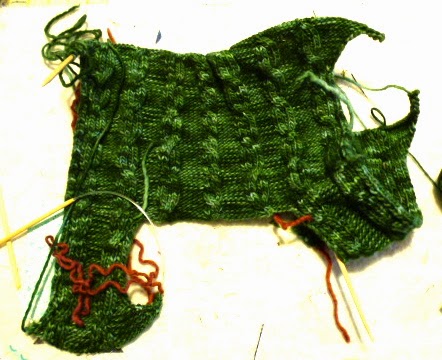 I'm still working away on my Flyaway Hoodie. The left front is done to the point of joining at the underarms and has been added to the appropriate place on the circular needle. The right side is almost to that same place. So it's going well and it's going fairly quickly. There hasn't been a lot of knitting or sewing done today, however. But I'll link up what I've got here to Judy's On the Needles.
Today was a gardening day. Last summer our son-in-law, Matt built a retaining wall along the one side of the patio. Before he built it, all the rain run off used to end up pooled on the patio, right outside our door. In addition to the retaining wall, he built a small garden in it. 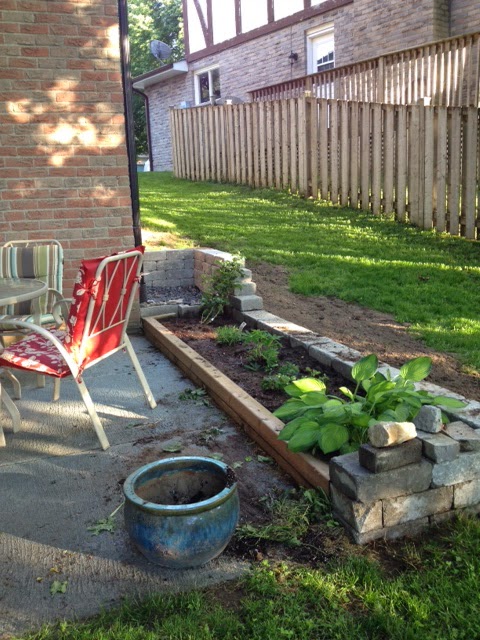 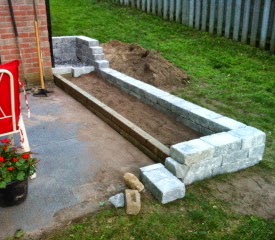 Today, I planted in it. It's not a very good picture, but
starting from the far end, there's a Joseph's Coat climbing rose and some lavender... I love the smell of lavender. Then there a lupine, some columbines and a big hosta that used to be in that blue planter. There are three of those blue planters, a bigger one and a small one and then this medium one. The hope is to eventually make a water feature out of these. We did some planting in some other areas of the yard as well, but I didn't manage to get any before and after pictures of those. I did more physical work today than I have in a long time. It felt so good to get back out playing in the soil again.  I've missed having a perennial garden to wander through. It's nice to get back at it. And it's even nicer to have young man's arms and a young man's back to do the heavy work. I probably haven't said this in at least a week or two..... I love living here.