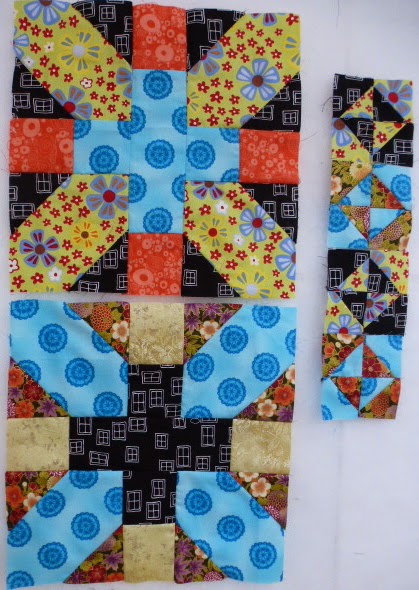 I'm a day late with this, but that's better than not at all. I was going to do this yesterday evening, but ended up reading all evening. It's the first time in a long time that I've had a book that I started and finished all in one day because I couldn't put it down. It was called The Midwife's Confession, and it was really good!! Anyway, last time I posted on Sunday, I mentioned I was thinking of doing up a few new blocks. Well, I did, and here they are. I have a bunch more cut out and ready to go. I'm sewing the bonus triangles into broken dishes blocks as I go, and might use them in a border for this quilt, once it gets to that point. I have a bin of fun modern prints, along with some black and whites. The plan is to use the black and whites somewhere in every block, some lights and some darks, and see where this takes me. It felt really good to play with something new. 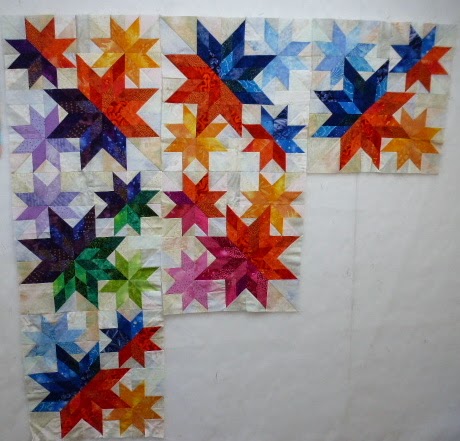 However, I have not given up working on my UFO's. Meteor Shower, another design by Judy Martin in her book Scraps, is going to be this month's assignment. However, I don't think I'll be able to get the whole thing done this month, so I'll break the goal up into at least two months. It needs six more of these large star blocks, so I think that's what I'll give myself as this months' goal. Next month will be the little stars and putting it together. This should be doable, and still give me lots of time to get this one, and a few others quilted up before our quilt show in October.
It's coming up on canning and preserving season, so I have to give myself some time for that. I currently have about 10 pounds of rhubarb sitting in my kitchen waiting to be processed, so, after I link up to Judy's Design Wall Monday and A Lovely Year of Finishes for the June goal setting party, I'm off to do some rhubarb crisps for the freezer and some pie fillings, plain rhubarb and some strawberry rhubarb using some frozen berries from last year. There might be jars on my counter to take pictures of tomorrow. It's still warm outside, with a gorgeous breeze, so I think I'm going to take the rhubarb and my cutting mat outside.
Posted by Cathy at 17:58