Vicki Welsh, who blogs at Field Trips in Fiber has issued a challenge for us to show our real studios. Not the fancy magazine style ones, that nobody would ever dare to use and mess up, but our real ones, no clean up allowed. She's going to do it in easy stages over 3 weeks, talking about various aspects of studios and our work spaces. Today's assignment is to talk about a non sewing related,
re- purposed sewing tool.Well, actually, it was yesterday's assignment, but I'm late, as usual.
I didn't even have to think about this one. It is something I have beside me all the time when I am sewing just in case of oopsies.
This is my super dooper, handy dandy, battery powered seam ripper. 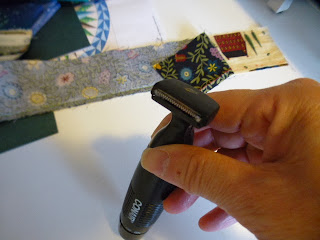 Also known by its more mundane name of mustache trimmer by Conair, found at Walmart for the whopping price of about $10.00. It might be more than that now. I've had this one for a large number of years. It uses one AA battery, and is the best money I ever spent for a seam ripper. 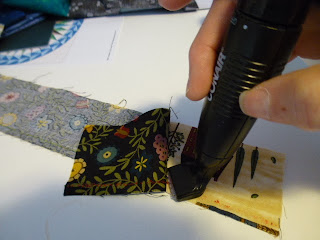 It's quite simple to use. Simply gently pull the pieces that need to be ripped apart open so that the seam threads are visible. Then just lightly touch the blade end of the trimmer to the threads that you want to cut. If you use the tool to go along the seam and nudge it open with the blade, it is literally done in seconds. The actual moving cutting parts are set far enough back that it will cut the threads, much like it would cut hair, but it won't cut the fabric. It is so much easier than the old version that requires the insertion of a sharp point into a seam to cut the individual thread one at a time. There are quite a few more non-traditional tools to be found at Vicki's.