My design wall looks exactly the same as it did last week. 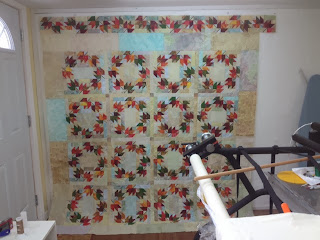 I had hoped to have a lot more done on this by now, but other things, like the pre-Christmas quilting rush, both my own and other peoples' has kinda taken priority. Maybe by the end of the year. it will get done. This is a pattern named Thanksgiving, from Judy Martin's book Patchwork Among Friends, which I just noticed is on sale for $9.95, by the way, if you are at all interested in her designs. I don't have any affiliation, other than a very satisfied customer. This is the third quilt I've made from this book. It was well worth it at full price, so this is a steal.
As far as the rest of my time goes, I've been making lists. Things that I need to get done now, and in the next few weeks. And then I've been thinking about next year, and what I'd like to get accomplished. I have listed some of my UFO's, the ones that came immediately to mind, and there are 10 of them. I'm sure there are more buried somewhere, but I have 10 I'd like to work on. And then there are some new projects that I'd like to start next year. At some point, I'll be updating some lists in my right side bar, showing these lists I'm making.
In the meantime, I'm going to link up to Design wall Monday, and then see if I can't get more things on my list crossed off.