I like alliterations, words beginning with the same letters in sentences are always such fun. Doesn’t take much to amuse me, does it? Monday's musings or how about Thursday thinking...  Anyway.....
I started writing this post on Monday, using my iPad and blogsy. For some reason I couldn’t get  the blogsy app in my iPad to load the pictures, and then someone came to drop off some quilts, and before I knew it the day was over and the post didn’t get written. Then, I meant to get back to it and write it yesterday, obviously unsuccessfully. So that takes me up to today just a few minutes ago and I decided that I would do it, only to be unable to find my camera that I used on Monday to take the pictures. I’ve looked in the most obvious places, and moved a few piles to look under things, without success. So I went back upstairs armed with my iPad to take the pictures, then came back downstairs to use the computer to write the post.
I’ve been working on my Northern Tree Line quilt a little bit at a time when I get a few minutes, using the pieces as leader/ender between other projects. 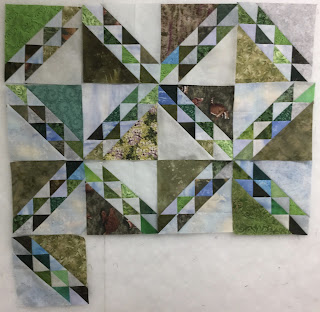 I really really like the way this is looking! I’ve also been doing little bits on the sampler that I’m writing up for our guild’s blog. 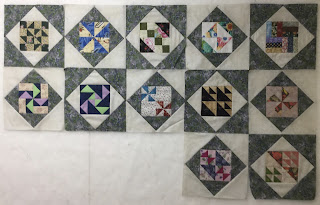 It’s free and anyone interested can go to the link at the London Friendship Quilters Guild and play along. I’m trying to get as far ahead on this as possible before our grand daughter arrives in January. The top row has been published, so far.
The main thing I’ve been working on though is customer quilts. 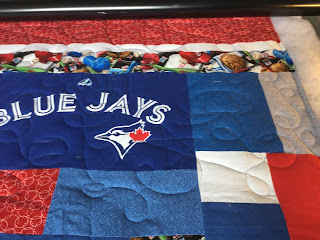 This one was fun. It’s for a little boy who’s a baseball fan. The quilting design is called “Batter Up”. It has baseballs and bats and caps and gloves. The other thing I’ve been working on is learning a new technique for knitting called Double Knitting. It’s challenging and slow going, but I’m getting the hang of it. I’m hoping to have enough of the project done by Friday for an On the Needles report. In the meantime, I’ll publish this and get back to the knitting.