How did it get to be Tuesday already?

I missed Sunday’s stash and stitching report, but I have a good excuse, really I do. Our son Noel is going away for his birthday this coming weekend....... he turns 36 on Friday.... so we had him over for dinner on Sunday. I did a little bit of hand stitching on La Passacaglia but not enough to show a difference from the last picture I showed. I have one more small rosette to stitch in place around the bigger one, and then I can start adding the filler pieces around the edging. I’ll get a picture of it next week. I did however, get a quilt cut out on the weekend. That one that I showed here, the one that I was silly enough to ask whether I’d start cutting it or not...... well I did. I used the Go Cutter, and cut out the whole thing. Enough to make 100 eight inch blocks. Not only that, but I’ve sewn up eight of them already, only 92 to go. 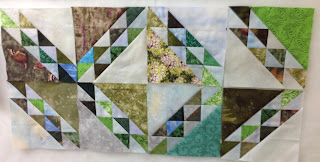 I have learned however, that I have to be very careful which way the triangle squares are facing before I sew the wing triangles on and I also have to be careful about which way the wing triangles are facing. Lets just say that there has been some ripping involved and I’m glad I didn’t sew a whole lot of them assembly line style. So far the large green corner squares aren’t showing up as true greens, but they will as more get added in. I found 58 greens in my stash, of all shades and values and tints, and I cut large and small triangles from all of them. I’m mostly just grabbing at random right now, trying not to have too many of the same ones too close together. But I suspect it won’t matter much once I really get going on this. They don’t really take all that long to do, providing I pay attention, and don’t have to rip any more.
My design wall has a bad case of quilter’s A.D.D. In addition to the blocks above, it also has 12 blocks from the LFQG Blog Sampler. 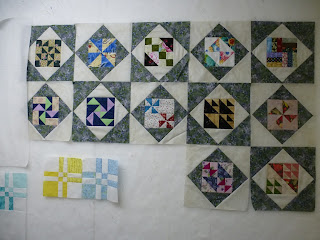 Once I get the instructions for the four I’ve recently finished written up, this will take us to about the end of February. And, as is visible in the left hand bottom corner of the above picture, the Disappearing Four Patch that I’m making for the soon to be grand daughter is also up on the wall. Somehow I don’t think it’s the design wall that has the bad case of quilter’s A.D.D. Oh, and those shorter posts that I was going to write more often, rather than long ones many days apart...... that doesn’t seem to be happening. Oh well......
For the record for this week, my stash numbers are:

And now, I have to go find that to-do list so that I can remember what it is I have left to do. I think I need to start using the Notes or Lists features of my computer gadgets so that I don’t keep losing the lists. My gadgets all sync with each other, and while I often lose track of where my phone is, I don’t usually lose track of the tablet or the computer. So if I find the list, maybe I’ll transfer it to the computer. Sounds like a plan..........