It doesn’t seem like I’m doing too terribly well at posting short posts about what I’m up to, does it. There simply aren’t enough hours in each day. Of course, the fact that my days don’t start until around 10 am and that it takes a good hour for the effects of the bed time meds to wear off so that my brain is at least semi-functional, doesn’t help in the least. At the most, I have 13 useable hours in the day. I’m trying to figure out a way to use them more effectively, so that all of the things I want to do can get done. So far, I’m not having much success in that area. But, I will try again, with assigning the different things that I’ve determined as a priority of stuff I want to get done a time and day to do them, since sitting around thinking about it will not really accomplish much, except to stress me out and end up feeling like I’m spinning my wheels. This is what I’ve come up with.
Sundays will stay the same as a hand stitching day, first to finish off La Passacaglia and then move on to other hand stitching projects that are rattling around in my brain, itching to be done. Last Sunday didn’t get anything done on any hand stitching. Becca and I went out yarn shopping for things that are on top of the list for making for her coming baby. We prioritized the list by the things that would be needed first. We picked up the cutest softest yarn ever, from Bernat called Pip Squeak. It’s a bulky weight yarn, which makes stuff knit up really fast. At this point, I like really fast. It’s being used for the pattern Baby Bear Set. I have the hat 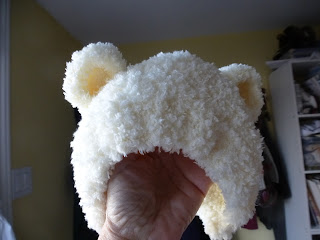 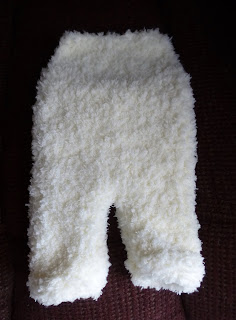 finished to the stage of needing buttons and ties. The bear body is done, but needs sewing and stuffing and the arms and ears to be made. That might get done tonight. That was what I did Sunday, rather than hand stitching, just because it was new and exciting and I wanted to see what it would look like.
Mondays, I want to focus on sewing up whatever clothing I have decided to make, whether it’s for the baby, for Becca or for myself.
Tuesdays will be for working on the long arm, and the evenings for knitting. This past Tuesday, that plan was interrupted by machine difficulties. I kept getting skipped stitches and the thread kept snagging and breaking. I was soooooooo frustrated I was ready to throw the machine out the window, assuming of course that I could lift it and that it would fit though the window, neither of which are the case. The next stage of the frustration was to think “that’s it, I quit, I’m calling all these people and returning their quilts and not doing this any more”. For anyone reading this who has quilts here with me, that stage didn’t last long, and I won’t be doing that. I finally calmed myself down and decided to see if I could fix the problem. I re-set the timing, a very time consuming job. I also found that there was a burr on the needle plate that might be snagging the thread, so I filed that down and declared it a day.  That took me to yesterday,
Wednesday, also will be a long arm day. The fixes seemed to work, since I had no further issues with skipped stitches or the thread snagging.
Thursdays will also be long arm days, which I will do as soon as I finish this post. And then the evening will again be spent with my knitting needles.
Fridays will be quilt days, piecing on various projects.
Saturdays I think will be free days, to do whatever needs/wants doing. We’ve also been attending church on Saturday evenings at 5 pm, which works wonderfully well for this very morning challenged person.
So, that’s my thinking. Whether it will work remains to be seen. I’m hoping that if my brain isn’t occupying itself spinning in circles trying to figure out how to do all that I want to do, there will be pockets of time during the days where I can do up a short blog post or two or three. Even if it’s to say, yes it’s working, or no it’s not. Stay tuned.........