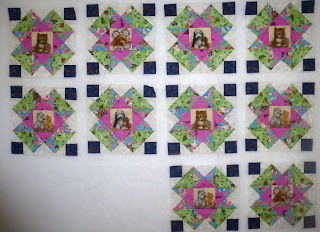 I have added 7 more blocks to this quilt, which I think I will call Playful Friends. There are 10 more blocks to do, then I can add sashings and cornerstones. I had thought to put the same blue as the corner squares in the blocks as cornerstones, but it looks like I don't have any of that left, so I'll have to find something else. I want there to be a nine patch where the blocks and cornerstones meet. I really thought I had some of that blue left, but I can't find it anywhere. 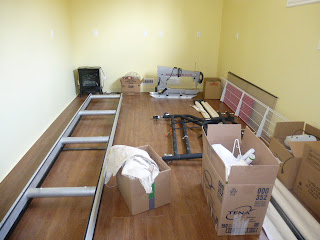 And this is what the other end of my studio looks like. Maybe Millie will get put back together later today. There is one more trip to Ikea in our near future. I saw this fabulous idea for storing threads and pantographs on the blog Tamarack Shack I think I will be using this idea, and hope that it will keep me at least semi organized. Once Millie is all set up, and the drawer units installed and filled, I can decide if there is enough room for a work surface to go along the length of that wall on the right. I'm thinking a surface about 14 feet long, which is the length of that wall, with shelves underneath it for wide width backing fabrics that I'd like to have both for myself, and to also offer to my customers for backing for their quilts. In between the shelves would be openings to allow for up to 3 people to sit for possible sew in days. And then up above that work surface would be some wire shelves for storing batting and other bulky, but light weight stuff. That back wall is going to have a system to hang quilts that are waiting for quilting. And there is going to need to be one very essential piece of equipment in there that isn't there yet....... some sort of step stool or ladder. Because otherwise I won't be able to reach anything. LOL!
So, for the rest of this afternoon, I'll be making chicken soup for supper, and sewing on some more of these Playful Friends blocks. I'd like to do something totally revolutionary, for me at least, and actually keep working on it until it is finished.
I'm linking up to Judy's Design wall Monday. There's lots of fun stuff to look at over there. I've already spent part of the morning looking and drooling over some of the projects.
Posted by Cathy at 12:19