Judy has a linky box up on Thursdays, where she asks us what has happened in the past week that we are thankful for. I am thankful for my new, so close to being finished that I can taste it, studio. It now has a design wall. And a large one. It measures the full width and height of the front wall. Now this may not seem like a big deal, but I've been without a wall for months, so it is exciting to be able to have one again. So exciting, in fact, that I had to try it out. 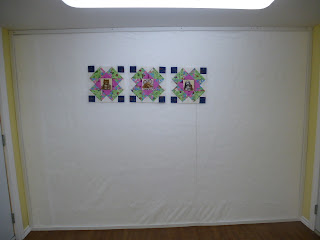 This is the beginnings of the quilt I was playing with in EQ7 the other day. It looks completely different than the original. The quilt and I had differing ideas of the colours it would be done in. I wanted it to be as gender neutral as possible, but the quilt had ideas of its own. 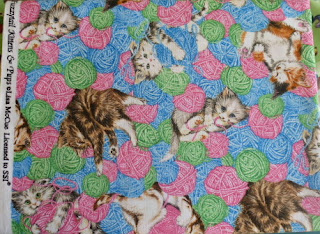 I've had this kitten fabric in my stash for years, just waiting to be used, and it did seem that it went perfectly with the puppies and kittens in the centers of the stars. But there's pink in it, so instead of it being gender neutral, it is becoming very little girlish.
And then I found this green fabric with fun animals and birds on it. 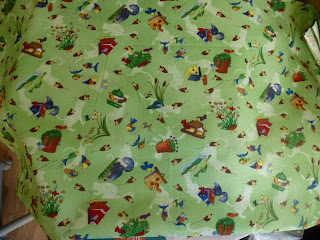 It insisted that it had to be in this quilt, and I agreed that it was a good fit. The only thing is that now, the stars have lost their prominence, and the pink around the center square has now taken the center stage. But, considering that the center fabrics were the beginnings of this quilt, that isn't necessarily a bad thing.

I think I'm going to take it easy for the rest of today and play with this quilt some more. Tomorrow is the day we take the long arm machine apart, and I must confess to quite a bit of nervousness about the prospect. I'm hoping it goes well, and hoping even more that it goes back together properly and will function as well or even better than she does now. I have some new parts on order, since it seemed a good time to install them, considering she'll already be in pieces. Taking a few more off won't seem quite so much of a big deal........ I hope.