I haven't accomplished a thing today. I had all these good intentions, but all I've done is sit on the couch, with my computer in my lap, watching the "Pillars of the Earth", which I've already seen. I finally got up the oomph to take some pictures of what on my wall. The Tropical fish quilt, which I wrote about here is still up there. Then there are my 100 block challenge blocks. The one on the left is in its beginning stages of sewing down, and there are still some pieces left to go on it. The one in the center is all stitched down. There are supposed to be little circles at the tip, and on either side of the gold points, but I don't think those are going to get put on. Then, if you go past these 3 pictures........................ 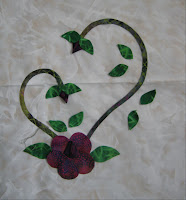 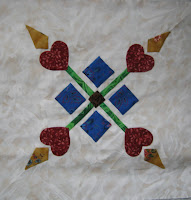 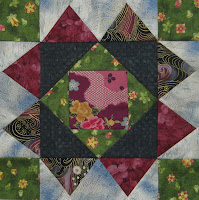 there is a picture of the first of the My Tweets blocks. It is so close to being done. All it needs are those teeny tiny top knots for the second bird finished, and then I can sew it down. However, because they are so teeny tiny, I've been putting off doing them. If I ever get up off this couch today, LOL, I just might add that to the list of the things I wanted to do today, that have yet to be accomplished, because I have yet to get up off this couch. (sigh) I can always blame it on having worked the weekend, but it's more that I've simply lost my oomph. But, sitting here won't find it, So, I'll post this, link to Patchwork times where there are a whole lot of other design walls to see, and to tempt me to stay on the couch, and then get up and get something accomplished for the day. 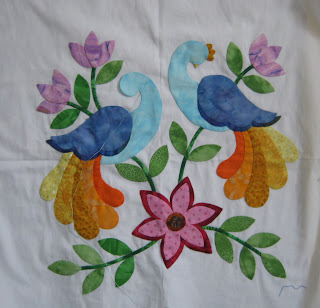