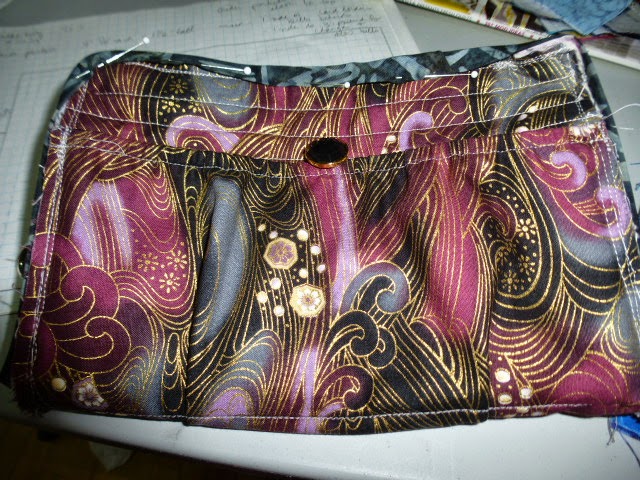 I am hoping this year, to have a hand stitching report every week on Sundays, combined in with the stash report. I have several large hand stitching projects on tap for the coming years..... notice the plural on years..... and the only way to get them done will be slow and steady hand stitching. However.... why is there always an however?.... today's hand stitching is to sew down the binding on a bag I've made myself. I have been wanting a new small bag that acts as a self contained wallet for a long time. I bought a pattern for one several months ago, and found it not to be what I wanted, so I scrapped that project, and started this on Friday. I kinda made it up out of my head, taking the good parts of various bags, and adapting it to what I wanted. It measures about 9 inches wide by 6 inches tall. It has space inside for a card holder, and a change and bill holder. It was a challenge, and there are a few things I'd do differently the next time, but overall, I like it. There are two outside pockets, which gap when anything is put into them. so I bought a couple of blingy button to hold them closed. I'll probably not actually get to the hand sewing until later this evening, during the first episode of the season of Downton Abbey.
In the meantime, because of this little project, and because of sewing up another section of the plus sign quilt, I do have stash out numbers.

I'm going to link this up to Judy's Fabric Report and Kathy's Slow Sunday Stitching, and then I have to get some work done on this month's row for the Canadiana Row Quilt that the guild is doing. I'm doing the instructions, and somehow I thought I had another week before the guild meeting, but no..... it's this coming Thursday.....eek! I should have had it written up and out to the testers ages ago. So that's my priority job for the day.
Posted by Cathy at 14:07