On and off my needles 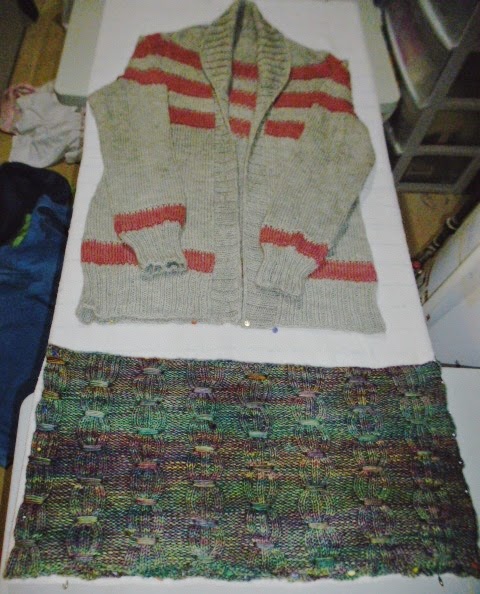 I have finally gotten around to getting my Carabe sweater blocked. And since I've also finished the Cinched Rib Cowl, I've got it blocking, too. And, I found some buttons today, finally, that should work with the sweater. Once it's all dry, I'll get the buttons onto it, and then I can wear it. And yes, I'll take a picture of me in it. The cowl is for Rebecca, and I'm not too sure how getting a picture of her in it will work, but I'll try.
In the meantime, I was supposed to be starting a pair of socks with the fun yarn that came in the mail at the beginning of the year, however, I sort of got side tracked. 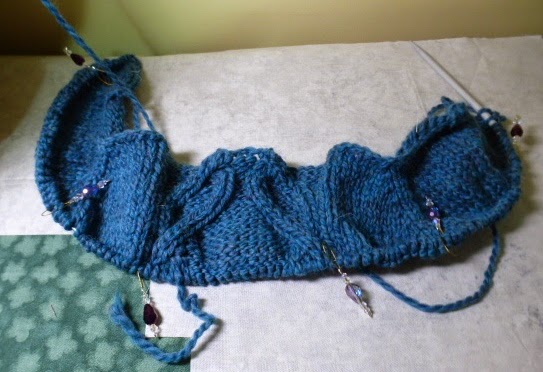 You see, really, it's all Judy's fault. She was talking about having finished not one, but two projects, and how she was looking at different patterns, one was a hat pattern and the other, a sweater. Of course she gave the links for them, and of course, I followed the links.  I always follow the knitting links that Judy finds, and have made a couple of sweaters after following those links. And there are more of the projects found on those links on my favourites list. Anyway, one of them was this fabulous sweater that has really cool cables, and is perfect for a yarn that I've had hanging around for at least a year. It's a Cascade Eco+. I had originally been planning on doing a sweater out of the magazine I received for Christmas, but this new one just couldn't be resisted. The pattern is called Traveller's End. So, the day after casting off the cowl, I purchased the pattern, wound the yarn, and started this sweater. I have yet to figure out how the front cables work. There must be some stitch picking up involved, because all I'm doing right now is the back, and the raglan sleeve shaping. I do read through patterns before beginning them, just to get a brief idea what techniques are involved, but I usually just knit as I come to the instructions. This is a bulky Aran weight yarn, so it should go pretty fast. So, As soon as I finish this post, and link up to Judy's On the Needles, I'm going to go and knit some more.