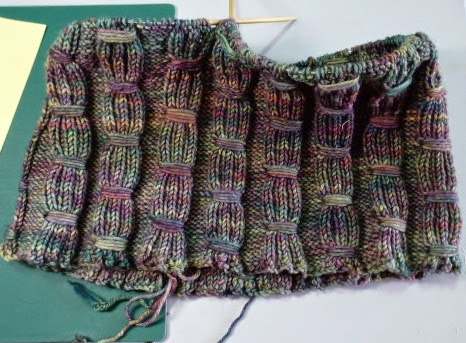 I'm still slowly working away at the cowl pattern from the magazine Love of Knitting. It's called Cinched rib Cowl, designed by Phyll Lagerman, and can be found on Ravelry here. It's a fun and easy knit, and will probably be given to our daughter once it is done. I think I'm at the 2/3 rd done point on it. I've found several sweaters that I'm itching to do, but I'm holding  off until I get this done. I also had some sock yarn come in the mail the other day, which I'm also wanting to get started on, although maybe not for socks. I bought 2 balls of each, so that, if I do decide to make socks, I can get the stripes to match. But they also might get made up into shawls or something like that. There isn't much else happening here. It's too cold and snowy to head outside for anything. I missed the guild meeting last night, and a workshop today. The sleep issues part of my fibromyalgia are acting up really badly right now so, even if the weather had been a bit better, I probably wouldn't have made it out to the morning start of the workshop. I'm seeing the doctor tomorrow to see if there is anything that can be changed or increased in medications for it. It impacts on so much that I enjoy doing. Since it isn't a good idea to handle sharp cutting tools, or fast moving sharp pointy things while in the fog state of not enough sleep, there hasn't been a lot of quilting or sewing going on here, either. Anyway..... enough about that.....
I'm going to link up to Judy's On the Needles, and then see if I can't come to some sort of accommodation with sharp moving things, and get some sewing done.
Posted by Cathy at 15:29