There's lots going on here, today. I'm sleeping much better, thanks to an increase in my prescription, so I have my energy and mojo back. I'm ready to quilt up one of my own projects. I had originally listed them on the right hand side bar of my block, from oldest to youngest, planning on quilting them in that order. But, when push came to shove, I just couldn't bring myself to load that oldest one. But then I couldn't decided which one to do. So, I took the easy way out. I texted Gail and asked her to pick a number between 1 and 13, without giving her the reason until after she picked a number. She picked number 8. So, I counted down to the quilt that was eighth on the list. 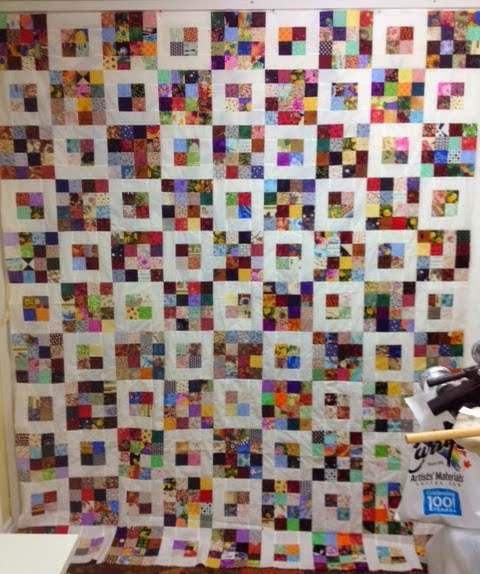 It's this one. So, I'm now in the process of making a backing for it. I wanted something light in colour for it, and I also wanted it to come from stash. I have a lot of cream and tan background what-was-I-thinking fabrics that I was originally going to use. But with the white in the front of the quilt, creams and tans just didn't quite fit. I revisited my stash and found some light greens with white backgrounds that work much better.

Some of it is yardage, and some of it is fat quarters. I'm squaring them all up, and cutting them to equal widths to make them easier to sew together and to make sure that backing ends up square for loading onto the frame. Some of this stuff has been in the stash for a very long time, so it's great to get it used up.
And then, if that isn't enough, I cut and started laying out a new project over the weekend. It's a pattern by one of my favourite designers....... you know who it is....... Judy Martin. It's called Texas Chain. I can't remember which book it's from, off the top of my head. This is what I've got so far. 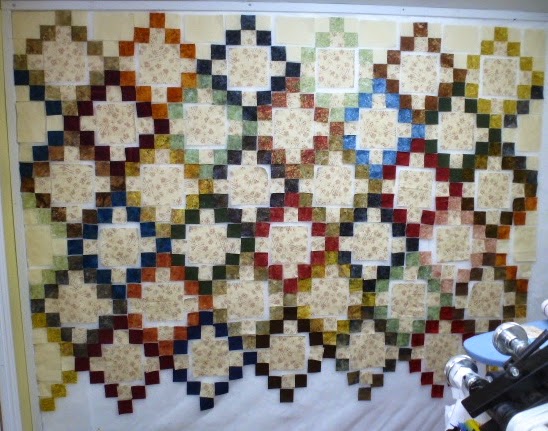 I'm using mostly a Stonehenge jelly roll, and a few other pieces from my stash to increase the contrasts in the chain. A lot of the fabrics in the jelly roll are quite alike in shade and value. So far, I'm happy with the way it looks. There are a few more rows to lay out, but I've run out of wall. I'll have to start sewing, and then add the rest. I still have a fairly wide range of colours and lights and darks left to finish it. I'm linking all this up to Judy's Design Wall Monday and also to Wips be Gone.
I'm hoping to get this backing finished today, and the quilt loaded,  and also some sewing done on Texas Chain. It's going to take a bit of thought to figure out the most efficient way to sew it together without getting up and down to take things off the wall one at a time. Sometime this week, I also want to get the last three stars sewn onto this rosette. I'd hoped to get it done yesterday, and worked at it until about 5 pm. But my eyes started to give out, and I switched to machine sewing instead. And now...... time to sew a backing together.