Well, we just got home from visiting with Noel and Laurie and Avery over New Years, along with Matt and Becca as well.  It was a really good time, but way too rushed. Three days just isn't enough time to fit it all in, but it was all that was available, and I'm so happy we had it. This grammy got to get in lots and lots of Avery snuggles, 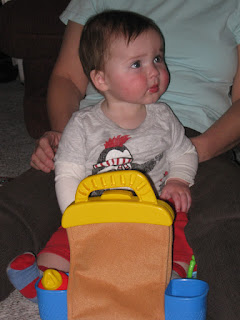 including one extra.
We were about half an hour away from their place, on our way home, when Scott asked me if I could check to see if the cell phone was turned on, just in case Matt and Becca needed to get in touch with us, as they were on their way home too. I said sure, as soon as I find my purse. Turns out, my purse wasn't in the car, but was back at Noel and Laurie's. in the downstairs hall, behind a box, which is where I had dropped it when we first arrived and were unloading the car. Somehow, it stayed there, and didn't get moved up to the room where we were staying. So, we have the first "oops" of the year. I read somewhere that what you are doing on New Year's day, is what you will do for the rest of the year. Does that mean I'm going to be scatter brained for the rest of the year? LOL. But, there was also lots of Avery snuggles today, and knitting today, and some travelling, and some blog reading, to catch up with all I missed over the crazily busy last couple of weeks. So that's lots of nice stuff to look forward to in the coming year, in addition to being scatter brained.

What I haven't done yet today, is any sewing. And there won't be any until I do something about that endless pit of chaos of my sewing room, beginning tomorrow. There isn't a flat surface that isn't covered with something, and the floor is starting to shrink, as it gets covered with stuff that no longer fits on any of the other flat surfaces. I can stand a lot of mess, as anyone who has seen my house and my sewing room can testify to. But, it has come to the point where I walk in there and immediately become paralysed due to the mess. So, my goal for the first couple of days of the New Year, is to try and at least begin to tame the mess. My UFO #5 might help with that. It is the Endless Chain quilt that I started a couple of years ago. The coloured sections in this quilt are actually string pieced from scraps, and that is one of the main things about my room up there that is so chaotic. I have to find a way to tame them, and the best way would be to use them up. So, I figure, once I get that place to the point where I can breathe, I'll sew a bit, clean a bit and sew some more. Anyway, this was originally supposed to be a stash report, wasn't it? It's an easy one:

I'm linking up to the first stash report linky of the New Year, at Judy's Patchwork Times, where there are others doing the same thing. I haven't looked yet to see what their numbers are like.
Posted by Cathy at 21:46