Way back in September, (how is it possible that it's 7 months ago already?), I was dragged by my tendency to start and get caught up in too many projects, into a Crumb Along that I had decided was a good idea, but not at that time, but I ended up doing it anyway, and I'm glad I did. It was a lot of fun, and used up a lot of bits and pieces that would either have sat littering my sewing room, or would have ended in the garbage. I've already shown pictures of it here on the blog, but this post is for the linky party where all of us who were playing in the Crumb Along  reveal our quilts, at whatever stage they happen to be in now. Mine was finished back in December, because it was destined to be a Christmas present. 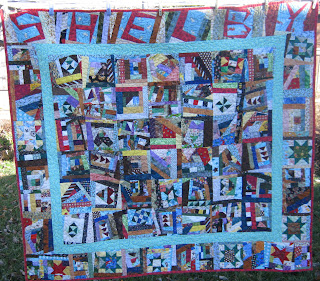 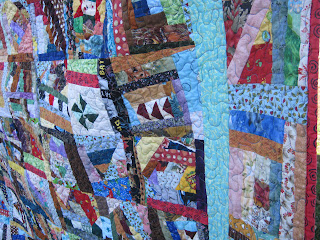 There is so much going on in the quilt, that any detailed or fancy quilted would have been lost. So it got a very simple overall meander. 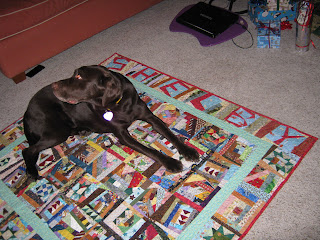 The final recipient of the quilt was our well beloved grand doggie Shelby, who had her very own Christmas gift to unwrap. There are other crumb quilts to see over at the reveal party at Jo's Country Junction. These things are quite fun to do, and there just might be some more of them in my future.........
Posted by Cathy at 11:28