It's been a while since I've done a design wall post. Nothing much on my wall had changed enough to warrant doing a post. However, that changed a bit today. Jennette and I have been swapping Disappearing four patch blocks for the past six months. I took down part of Texas Chain that's been hogging the wall for months now, 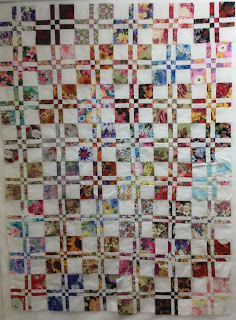 so I could lay them out and see how they look. I really, really like it! However, I discovered an oops that happened somewhere along the line. We started out with doing 1 1/4 inch cuts for the centre crossed ares so that we ended up with 3/4 inch finished crosses. Somewhere along the line, we switched over to 1 1/2 inch cuts, ending up with 1 inch finished crosses in the centres. It's not an absolute disaster, though. It can be put together with some creative sashing.... maybe a narrow border and put the different ones on the outside. We're taking a break for the summer months, and will start up swapping again at the end of September.
After I finished playing with these, I took them off and put Texas Chain back up on the wall. I did a couple of hours worth of sewing and arranging on it, and it is getting much closer to being done. The end is in sight. 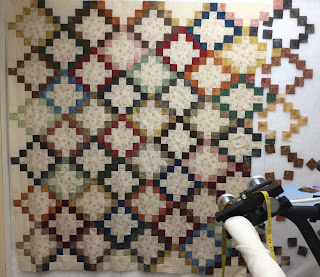 Just one more row of chains left to do, and the  I can move on to the borders. It's getting late, so I think I'll link up to Judy's Design Wall Monday, and then maybe find something light and fluffy to watch on Netflix. There might be some stitching on La Passacaglia going on, as well. Which means it will be listening to something light and fluffy, rather than watching.