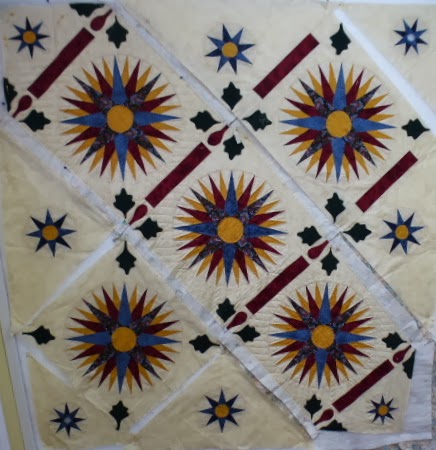 As planned from yesterday, after pulling this very old UFO from the plastic bin, I put it up on the wall today. I needed to remind myself how it went together, and how much is left to do on it. This was a four part pattern from Quilters' Newsletter, starting in November 2003. It's called "A Few Compasses Between Friends". This is an example of a love at first sight quilt that got worked on intensively for a couple of years, and then got replaced and set aside. Yes, I'm fickle when it comes to my quilt loves. It started out as a variation on the quilt as you go technique, where I started quilting the center panel and planned on then quilting the large side triangle areas, and then joining them with the two long diagonal sets of sashes. I think I stopped working on this because I became unconvinced that doing it this way would work, but couldn't figure out how to salvage it. The center diagonal section is almost finished hand quilting. 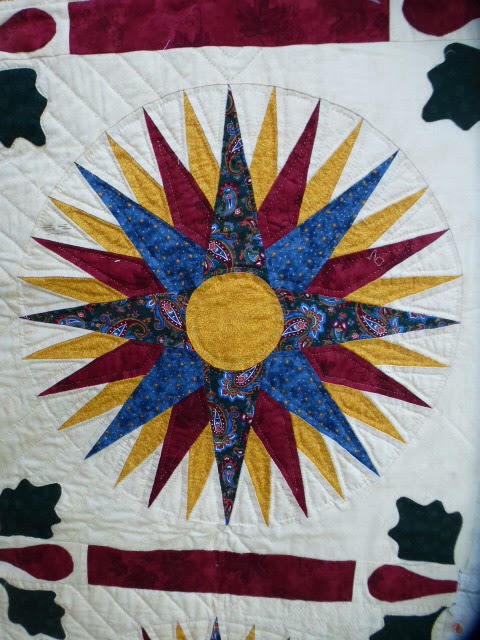 There are just the end triangle compass sections to finish the hand quilting on,  and I got about a quarter of one of those done yesterday, during my Sunday hand stitching. I think once I'm done that, I'm going to finish piecing the rest of it, and then assemble it into a whole and finish quilting it that way. I can't remember right now why I even decided to quilt it in sections. It would have made sense to do it this way if it was being machine quilted on my domestic, but the reasoning for hand quilting it this way has me stumped. And that's pretty bad, because I'm the one that decided to do it this way. But, then again, it was over 10 years ago. I have to get into the boxes that have my old patterns in them, and find this one. I know I went through all my old magazines before we moved, and tore this one out and put it into a binder. Just need to find the binder. I need to know the finished sizes of these blocks before I can assemble it. It is still going to take some staring at it, in order to figure out how to finish it. I have to add the backing to both sides of the center panel that is already done, and then add in the batting, probably whip stitch it together so there aren't any bumpy areas. I'll probably have to hand stitch the length of the red sashes all the way down the length of the center section in order to attach the side triangles. I don't want machine stitching to show up on the back as if it were quilting. In the meantime, I'm linking up to Judy's Design Wall Monday. and then plan onwatching the olympics and knitting on some socks.

Labels: A Few Compasses Among Friends