Here we are, a brand new year, and as many have said, the slate is wiped clean, as far as the stash is concerned. This is my fourth year keeping track, and the first time in those years that I haven't had a huge influx of fabric due to year end sales. I am actually starting off the year with more fabric used than added, because nothing has been added. I didn't expect it to feel this good.

I'm changing how I count, just a little bit. I used to count fabric as used once it was cut for a project. But I have discovered that I sometimes have fabric left over at the end of a project that will have to be added back in. So, I am going to count as blocks are made, for the most part. And it's easy to figure out the amount used, just by figuring out the square inches of the individual block units, and then multiplying it out. Most of the above use was for the Three of a Kind blocks. Each block uses 4.2 inches, so it's really easy to figure out, as I make blocks, how much fabric is used. I'll do the same for the rest of my projects, whenever possible.
I've also decided that this is the year I want to get My Tweets finished, and spend some time doing the hand stitching for it. I'd been procrastinating on this one, which is block 8 out of 12, because I was at the stage of needing to do the tiny top knots for the birds, and the circles for the flower centers, neither of which are exactly my favourite part of this process. 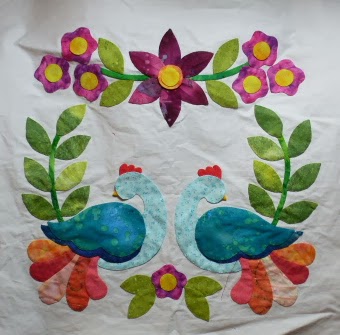 Well, today was the day. I got as far on the hand stitching as I could get without those things being done. So, I spent a couple of hours preparing those shapes and getting them glue basted on. And here she is, ready to be finished. Another hour or two should do it, and then I can start block nine. I'm linking up to Judy's Stash Report and Kathy's Slow Sunday Stitching. Lots of fun stuff to read and look at in both places.