Or should I more accurately say, off the needles. You remember that sweater I was working on, and how I was concerned that it was going to be too small, even though I did a test swatch and blocked it and it should have been fine? Well, it wasn't. I got it finished down to the bottom of the body of the sweater, cast it off and tried it on. No amount of blocking would have stretched it out to where it needed to be. So, here it is...... 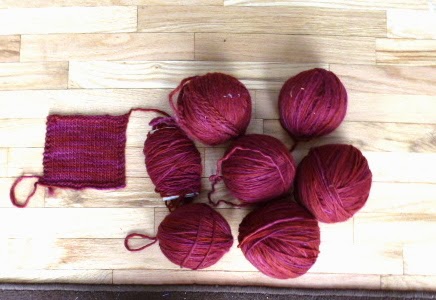 It was rather heart wrenching to rip it all out. But I must say I was more than half expecting to need to. I learned a few things from knitting it, so it wasn't a total loss, and I am going to be starting it again. I did a better test swatch this time, and by going up a size in the needles, got a match to the gauge, without having to heavily block it out like I did the other one.  The other thing I learned from the first time through, was that I didn't like the way the pattern said to finish the neck. So when I start it the next time, I'm going to do a ribbed neck before getting to the body of the sweater. They called for an icord neckline, which I didn't like. The first time, I picked up the stitches and knitted a ribbed neck, and like it, so, rather than having to pick up the stitches for doing the neck, I'll do the ribbing right from the start. 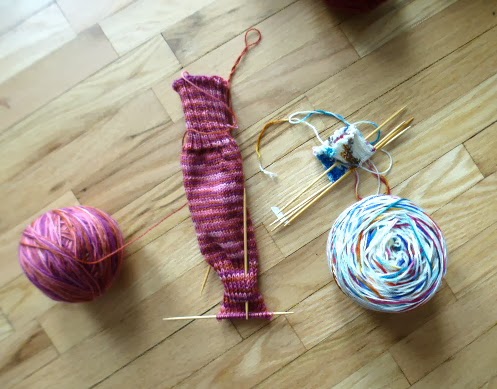 In the meantime, I'm working on socks. I have the pink one, where I'm ready to turn the heel. And then, just because I was discouraged from having to rip out the sweater, and wanted something a bit more interesting than the pink sock, I started the white with the fun colours in it, just to see what it would look like. It's getting an interesting distribution of the colours stacked one on top of the other. That might change though, once the ribbing is done. If it doesn't, I might rip it out and add a couple of stitches to see if the colours will separate out a bit. But, then again, after looking at it closer, it's kinda neat just the way it is.
I'm linking up to Judy's On the needles.
Posted by Cathy at 14:08