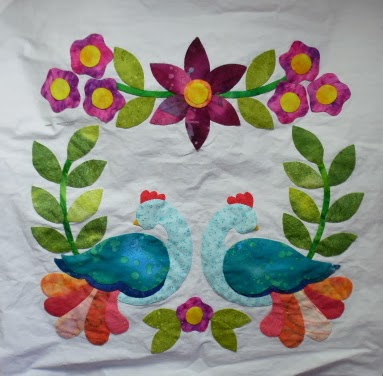 Here it is again. The My Tweets block number 8. The only things left to stitch down on this one are the three yellow flower centers up on the top left. I will be finishing these up this afternoon, and then I can start on the next block. Depending on how much longer it takes to stitch those down, I might get the pattern pages for block nine taped together, and maybe the bias stems ready to start. I think I am going to approach the next block a little differently. My usual habit has been to prepare all the shapes and glue baste them down, before starting any of the stitching. This time I think I'll take it slower than that. It might make the task a little less overwhelming. I'll try it, anyway. It might give me a bit more of a boost to be able to more clearly see the progress on the block, as different elements are added. I'm finding it helpful, so far this year, to have kind of a loose schedule for doing things at a certain time, in this case, choosing to spend a certain amount of time on Sunday afternoons peacefully hand stitching. It is soothing and relaxing, and gives momentum to a long standing project that I really want to get done, since it has been on the go since the end of 2010.... yikes!!
My stash has seen a little more reduction, slowly working on various blocks and projects, and no additions. That might change by the end of the month, since there is a background fabric that I need for a new project. I'm not sure if I've mentioned this one before, but it's a block of the month, being posted by Mad About Patchwork, called Cathy's Carousel, not named after me, but the designer,  named Cathy Price, who designs blocks of the month for her guild, the Lanark County Quilters' Guild. It actually started 3 months ago, but I've printed off the instructions, so I won't lose them.The original plan was that Gail, who blogs as The Cozy Quilter, and I were going to work on it together, at the same time. However, I got a bit impatient, and really wanted to get started on it..... there's that startitis flaring up again...... so I started it yesterday during my sewing afternoon with Gail and Karen and Christine, over at Gail's house yesterday afternoon.

There are quite a few more strips to be added to the braid yet, but it is started. I think it might get set aside in its own little box, and become my take to Gail's project for the next undetermined period of time.