So close to being able to sew again....

I went over to the new apartment this afternoon, since I had decided that it was time to set up a sewing space. Any space, I don't care how big, or how permanent, at this point. Just as long as it is something that will work. I found a small folding table, that also adjusts in height. The bonus was that we already had it, so I didn't need to go out and buy anything new. I set up my machine, and now I'm good to go. 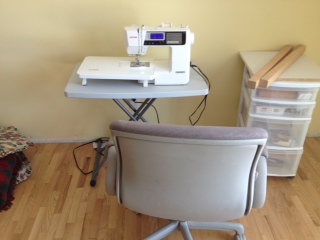 It isn't big. It isn't glamorous. But it will work. I was going to stay over there this evening and do some sewing, but my eyes aren't great for driving in the dark..... the lights get all kinds of weird halos and shadows around them...... so I thought I'd better come home since it was starting to get dark.
One of the things I did while over there was rummage around in all my fabrics and find some possibilities for doing the Lazy Sunday Mystery quilt, designed by Bonnie Hunter. Clue number one is in this edition of Quiltmaker magazine. I think the ones shown below here just might be them. I started with that large piece of black backgound print, and then pulled colours from there. 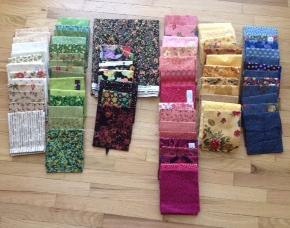 Gail and Christine are doing this one too, so there will be the opportunity, now and then, to be able to have some sewing get togethers, which will be fun. I also have some pink nine patches that I have to make before March 14th for the nine patch swap at the guild. Sounds like I'm turning into quite the social butterfly, and having a blast doing it.