I have last week's and today's blocks finished. 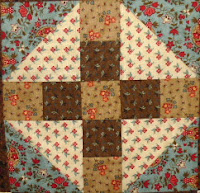 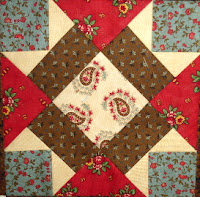 They are now sashed and added to the growing quilt. I really like this idea of sashing them and sewing them together as they come out. There are now 2 rows completed and sewn together. At the end of the year I will have a completed quilt, rather than still having the job of sewing it all together. I'm not sure whose blog I saw the idea on, but it was a great idea.

The lighting is really bad in the room where these are hanging. I tried adjusting the light exposure in iphoto, but it is still quite dark, but it is good enough to give an idea of what it looks like.
Posted by Cathy at 14:10