I've been working really hard this week on getting quilts done. After all the opinions about the borders on Avery's truck quilt, I decided to simplify what I was doing. I kept the same idea with the bricks, but only one row of them, and I put a narrow border on either side, to isolate them, and unify them. I like it. Thanks you, everyone who left an opinion. 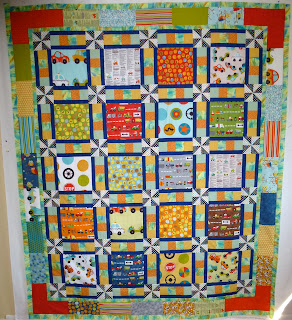 I'm now in the process of making a backing for it. It's taking longer than I thought it would because I'm using up the leftover layer cake squares, some odds and ends of kiddie fabrics and some fat quarters. I'll get a picture of it when I'm done.

Then, I've gotten a few more of the Great Granny Squares done. There are 11 of them now all sewn together, and I have 2 more all laid out and almost ready to sew up. I think I'm aiming for 20. 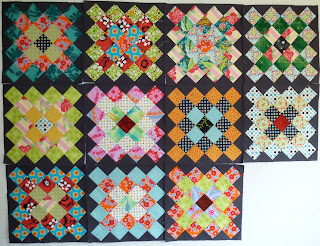 Both of these projects were started in August, so they both classify as "Newfo's", which are defined as new projects begun during the month, and not necessarily finished, so the have the potential of becoming new UFO's........ hence "Newfo". Barb, who blogs at Cat Patches started this trend back in January, but this is the first month I've participated. She has a linky party going for everyone who started a Newfo in August, which I'm going to link this post to.
Posted by Cathy at 15:09