I was just about to do a rant about the differences in prices between the States and Canada, but then I decided I'd better check my facts first. Yesterday I went out in search of a specific yarn to make this scarf Somehow I had it in my mind that I could order it online for about $20.00. So when I got to the store and found out that they wanted $38.00 for it, I nearly choked and fell over in a dead faint. However, I was wrong about the $20.00 online. It is $30.00 online, so it isn't a huge gap, but it is still way too up there in price for me. So I settled on a sort of more economical choice. It's a 50% merino wool and 50% silk and it is just so soft and will feel so nice on my neck come the winter cold.  I got home, and started in on making that drop stitch pattern, only to decide that it looked really blah in the plain colour, so I ripped it out. I only had maybe 4 inches done, so it wasn't that big of a deal to rip out. But then I had to come up with another pattern. I got to thinking about how textures always look better with a plain coloured yarn, so that's what I started looking for, and I have this 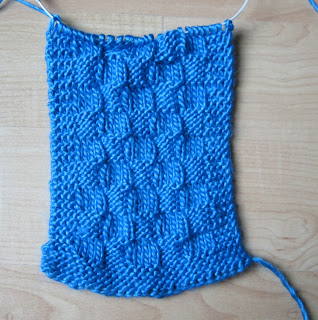 done so far. I am quite liking it.  I have 3 balls of this stuff, so we'll see how long it will be after all of them have been used. Hopefully long enough to fold in half, and then put it on with the 2 ends pulled through the folded part. I like wearing scarves like that. And it is so soft, that I'm stopping and petting it every so often as I knit. (giggle)
Anyway, enough of that. I didn't get any of my quilty goals done yesterday, so I'm going to try again today to get Noel's Batman quilt loaded and started, and the  Fat Quarters Star quilt along block done. Somehow I had it down on my calender that I had to work today, but it turns out that I don't. I feel like I have a bonus day off, so I'm going to go and have some fun with it. And, even better, I don't have to cook today, either, because I made  Chicken and Dumplings yesterday, (thanks Denise), and there is more than enough for leftovers today. Bonus!!!
Posted by Cathy at 12:45