So I’ve been thinking..... yes I know, that a very dangerous thing to be doing, but still, I’ve been thinking. I have a ton of un-quilted tops in my studio that need to get done. They aren’t going to get done unless I schedule them in. And I know I’m not going to schedule them in unless I think about it ahead of time. So, that’s what I’ve been thinking. As with all thoughts, if I don’t write them down they will go wandering off all over the place never to be found again. So I’m going to write them down here where they will be corralled all in one place. I would like to think that I will be able to get one of my quilts done each month but I know that will be setting myself up for failure so I’ll do every other month. If I keep to it that will make 6 finishes at least.
The first one I really want to get done is a Judy Martin design called Three of a Kind. 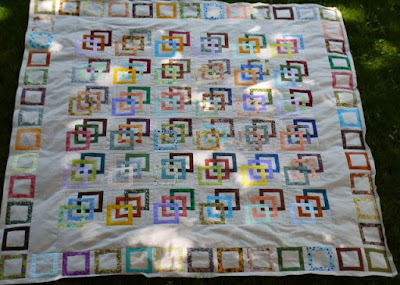 It’s been waiting since May of 2014 mostly because I haven’t figured out how to quilt it. And I still have no ideas. It won’t be the first on the list to quilt though because I need to get the East to West Mariner’s Compass  quilt that I’ve been working on lately finished and quilted in time for a trunk show in March.
The next one I want to do which has also been waiting a long time was a free design from Moda Bake Shop called Avignon Picnic. The top was finished in May of 2012. This was the best picture of it I could find. 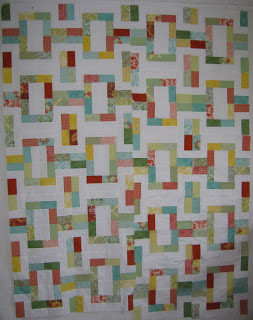 Then there’s one that was designed by Judy Laquidara called Freeze Frame. 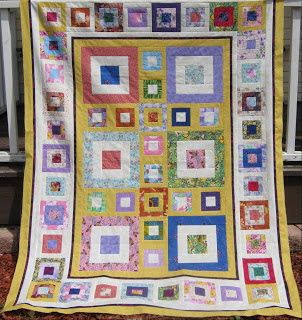 This top has been finished for almost 7 years, My last blog post on it was April 30, 2011. That’s pretty bad. I think it would look great in Abbie’s room when it is finished.
Then there’s a scrappy 36 patch quilt. 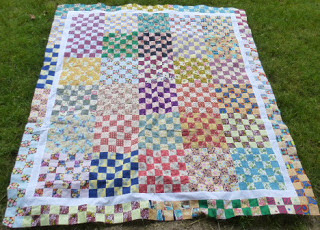 It’s been finished since July of 2013.
There’s this one called Black Tie Affair, which was in a Quiltmaker magazine. 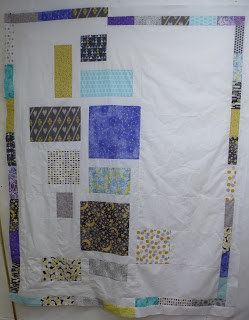 I originally made it for Abbie, but her Mommy decided she didn’t like it, so it has aged since then. It was finished in October of 2015, so it’s the youngest of all these quilts.
But the oldest of them all is this Round Robin quilt, done before I even was blogging. 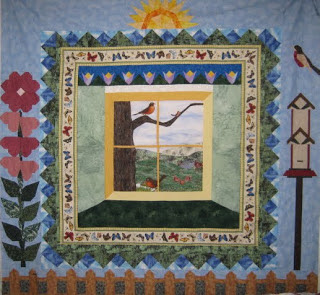 I think it may be anywhere from 10-15 years old. The hold up has been  how on earth do I quilt this. However, I think I have the mechanics of it figured out, if not the actual designs. And looking at the picture of it here, I’ve got an idea for design too.
So, there is is, in writing and saved on the blog which is a great place to go in order to reference old projects. If I didn’t have this blog I would have no idea of when any of these projects were started or finished. I am hoping to have the piecing on the East to West compass quilt finished before the end of this month and will load it to be quilted in February, perhaps before. I hope this works.