Earlier this month I made myself a rough plan of how I would like to tackle the multiple hand piecing projects I have on the go. I decided the easiest way would be to roughly divide them into blocks of time during the month. I’m not going to be rigid about this, but more or less use it as a guideline. I have two Willyne Hammerstein projects going. I’ll work on those from about the 1st of the month to the 15th. I’ve already shown pictures of my progress with those in earlier posts this month. Then from the 15th to the 21st I’ll play with my Connections pieces. I didn’t get much of that done this month, but did make a little progress. 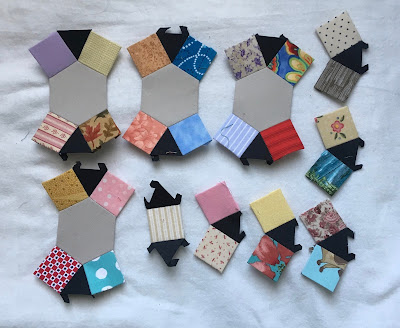 And then from the 21st to the end of the month I’ll play with the sampler I started a couple of years ago using half hexagons paired with other shapes.

I started in on that on Saturday. After looking at the picture of these, they remind me an awful lot of the radiation shelter signs that used to be prevalent in the 1960’s when there was fear of nuclear war. All of these projects now have their own project boxes so I can pull them out to work on them and then put them back when working on something else. I’m organized...... who knew I could do that? (grin)
In between working on these I’ve also been doing a lot of knitting. The online store EatSleepKnit does a yarnathon thing where you can participate in knit alongs and for some reason it caught at my attention at the beginning of this year. The first challenge was to knit something using a pattern from an Australian designer named Ambah O’Brian. I think one of the things that caught my attention with this was the challenge to try some new stitches and techniques and new knitting designers. I’ve finished the first quarter challenge already. I did up a pattern called the Mendia Cowl. Mine looks like this finished. 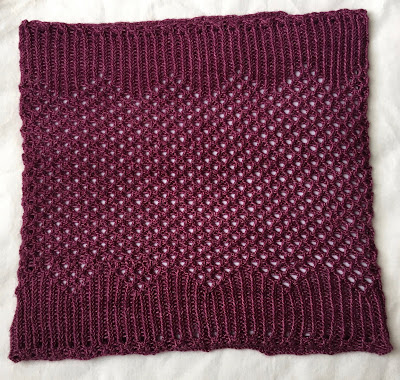 I slipped a couple of pages of white paper into the cowl so that the lace work on it would show up in the photo. There were a number of different techniques in this I’d never done before so it was a challenging and fun knit. It did have the down side that the eyelet pattern that is on the other side of the cowl isn’t completely lined up properly. But I wan’t going to rip it out and it won’t be noticeable when it is being worn and it will still be warm even with the mistakes.
Now I’m working on a very large shawl using up some Alpaca yarn that I bought quite a few years ago. I made a pair of socks out of it, only to find that they shrank quite badly when accidentally thrown into the washing machine.  So the yarn sat and aged while I waited to decide what to do with it. The pattern is called Impressionist MKAL. The designer used three colours, but I’m only using two. Right now the pattern says that it is 75% done and there are 462 stitches on the needles. You can see a bit of the lace work in it and also the colours of the yarn. 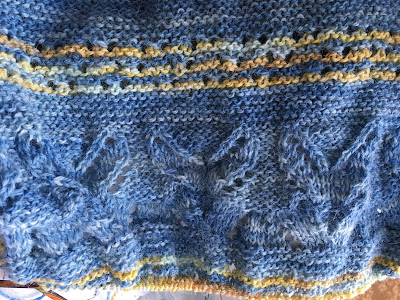 I’m two rows away from changing back over to the gold yarn for the final edging rows. Only 24 more rows to go and it is finished. But considering that the final number of stitches is 534, it is going to take a while to get it done.
Given that it is a very cold day out there, my goal for the day is to stay inside where it is warm and play with fabric and yarn. So I’m going to link up to Kathy’s Slow Sunday Stitching and then finish up my coffee and then stitch slowly and relaxingly for the rest of the day.