A few days ago I did a post about setting some goals for finishing off some quilt tops that have aged long enough on shelves in my studio. I think I want to do the same thing for some other areas as well. I have hand stitching projects that I’m working on or want to start that are also going to require some planning and goal setting. Once more, if I don’t write these thoughts down they will wonder off somewhere and get lost so I’ll write them down here. For this month I want to finish my East to West Compass quilt. 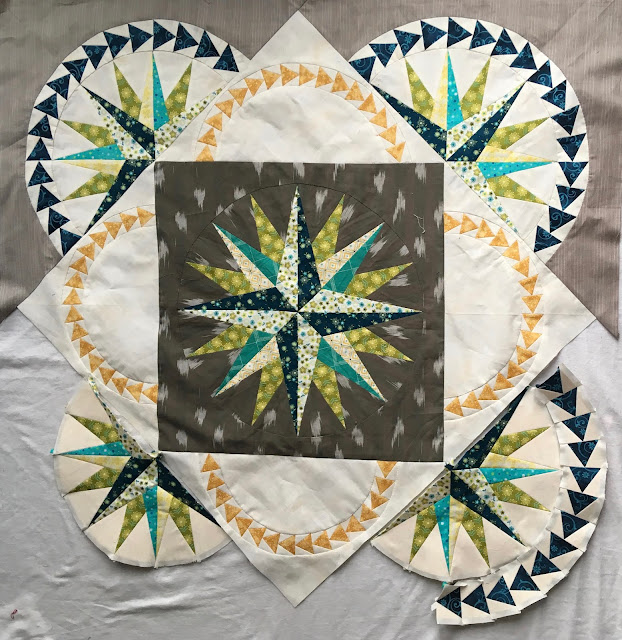 That has priority right now and is January’s One Monthly Goal. I have 3 more geese to sew onto the third triangle and then it can be sewn into the background. The other won’t take long. It should be done by this time next week.

Then a group of us from the London Friendship Quilters Guild have decided to work together doing a quilt from one of Willyne Hammerstein’s 3 books. We’ve each chosen a different quilt to do. Our goal is to have them done before the next quilt show. I’ve chosen mine and actually picked out a few fabrics for it as well. I don’t have any pictures as yet. For that matter, the papers aren’t cut yet either. But I did that deliberately so that I wouldn’t be tempted to start it before finishing the Compasses.

Another hand project I want to work on is called Connections. I put out a request earlier this year to guild members asking for 2 inch squares to use in the project. 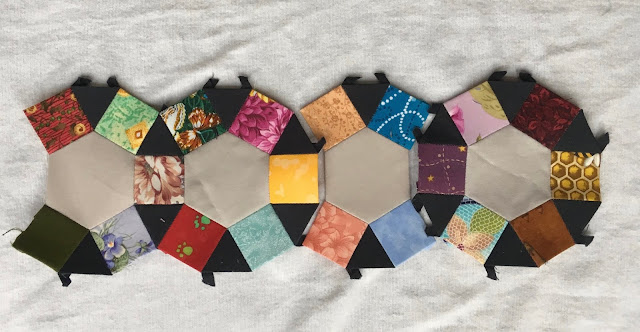 At the time I started it I was trying to decide between light grey or cream coloured hexagons and dark grey or tan coloured triangles. I settled on the greys. It got started and then set aside while I worked exclusively on Friendship Chain. I love hand stitching but it does have the down side of taking a long time to finish one project. This one doesn’t take long to make up the units. It’s the number of them needed that will take the time.

Then I have one more that I started a couple of years ago that is a scrappy sampler type using large pieced hexagons that will be put together into something like a row quilt.  I don’t have a picture of it. I went looking for the box that it is in but it seems to have gone missing for the moment. I’m sure it will turn up at  some point, most likely when I’m looking for something else. It’s probably up in the studio since I usually take it with me when we are vending at quilt shows. It’s a good project for demonstrating the technique.

So that is 4 hand projects I want to work on, although it will be down to 3 very soon. What I’m trying to figure out is how to work on them all at once. Do I assign days to them....... no that won’t work, I think that would be way too confusing. Maybe I can assign weeks to them. Two weeks to the Willyne Hammerstein project, one week to Connections and one week to the sampler. That way each one of them would get some quality time each month. If I make a concerted effort to make sure each one of them has its own container and all the stuff for each one is kept together, it just might work. To keep myself on track with goals I’m going to join up with the One Monthly Goal linky party each month. At the beginning of the month I’ll write a goal post, which is what this one is although the rest will be shorter. And then at the end of the month write a post about what actually got done. Accountability helps and it also helps in motivation for blogging more often which is something else I want to do.
In the meantime, I’m gong to link to Kathy’s Slow Sunday Stitching and to One Monthly Goal
Posted by Cathy at 13:49