I’m continuing to work on the sampler quilt for the London Friendship Quilters’ Guild Blog. It is now halfway finished, for me at least. These last three blocks take it into the summer now, I think. I just need to get them written up and then scheduled. 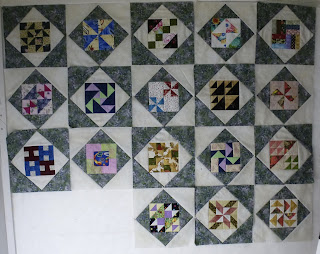 I would like to have it done in time for the guild quilt show in October. That should be doable, depending on what I decide to do about borders. The blocks are 12 inches finished, so without borders it will be 60x84, which would be good enough for a twin bed, I suppose. But I think it needs borders of some sort to finish it.
The other thing I’m continuing to work on is Northern Tree Line. 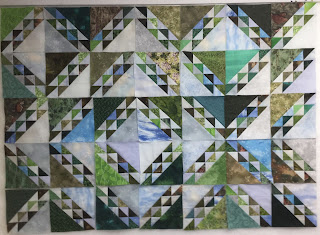 I’ve been using the pieces for this as leader/enders for the sampler blocks. I was planning on putting a few more together tonight until I discovered that I’d put some of the green wing triangles on wrong. There aren’t a lot of them wring, maybe 7 or 8, but it was enough to make me decide that it was enough for the day. It won’t take long to rip them reverse sew them, but it can wait until tomorrow. Another hour or so should see at least ten more of these blocks up on the wall. Maybe tomorrow. For now, I’m going to link up to Connie’s Linky Tuesday and the Canadian Needle and Thread Network. After that, it might be some Tv and knitting time.