I’m a day late with this, but at least it’s getting done. I’m not really sure what happened yesterday that I didn’t get to it. I finished up my mitts. I still had some of that wonderful Malabrigo worsted yarn left, it’s so wonderfully soft, so I found an easy and quick cowl to go with my mitts. 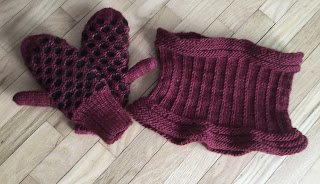 It’s called Malabrigo Neck Thingy. I still have some more of that yarn left, but not sure if it’s enough to actually do anything with.
Once I finished those, I started on the wrap that I wanted to do. It’s made up of a selection of blue yarns and is knit one row at a time. 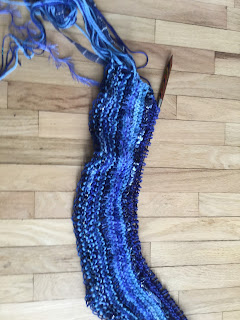 Each row is begun and ended with a fresh strand of yarn, which creates the fringe. There are five or six different yarns in it, including a ribbon metallic and an eyelash type, 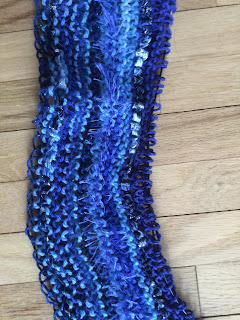 which I think is going to make for a fun effect at the end when it is finished. It’s going to be around 60 inches long, before the fringe. I’m not sure how wide I’ll make it. Most likely I’ll just keep going until it tells me it’s finished. It’s fairly loosely knit, using a size 9 mm needle, so I think it will end up being a summer type wrap, good for using in air conditioned restaurants or something like that.
I’m linking up to Judy’s On the Needles.