Years ago, back in 2012, I started a quilt called Aunt Lucy’s Medallion. I love sampler quilts, and at first glance, this one was perfect. However, it turned out that the blocks and the finished size of the quilt were smaller than I wanted. Once finished it would measure 55 inches square, not a great size for doing anything useful. So this quilt has sat for the last four years, waiting for an idea on how to make it bigger so that it could be used to keep somebody warm. 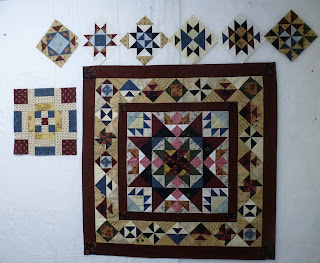 Fast forward 4 years, and there is a new project on the Barbara Brackman blog called Westering Women. I love her stuff, and I’d wanted to do it, but I’ve put myself on a no starting new projects until some old ones are finished mandate. So I looked at it, sighed and went on. Then yesterday, after seeing the new block for February it suddenly occurred to me that I just might be able to mix the two, Aunt Lucy and Barbara Brackman. So I did a little playing around in Electric quilt this evening to get an idea of what size it would end up if I added these 12 inch blocks to Aunt Lucy. The result will be a lovely 87 inches square, meaning a perfect sized bed quilt. Here’s the January block all finished. 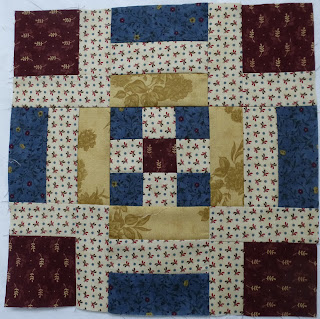 I still have 14 of the 6 inch blocks to do as well. One of those along with the Westering Women block each month should be more than manageable, and it gets another old UFO back into production. It’s a win-win, I think. I have a large amount of civil war type fabrics still in my stash, more than enough to finish this, I think, which means more stash reduction..... another win-win.
Tomorrow, I’ll play some more with this, along with the blog sampler for the guild. I loaded my Disappearing Four Patch onto the machine today, so I’ll be playing a bit with it as well.