I went out yesterday and bought myself a new machine. I've been dithering about whether I need a serger for a long time. The argument being, that I have an overcast stitch on my regular machine, so why would I need a separate machine for it. I've been doing research, and finally decided yesterday to do it. I brought it home, set it up, and got out a bunch of flannelette that Becca bought for receiving blankets. I was originally planning on either hemming them, or putting some sort of binding around the edges. But I did them up on the serger instead. All I can say is, how did I do so much sewing for so long without one! It is the fastest, most amazing thing! I wish now that I'd had one over four years ago when I was making all those diapers for Avery. It would have made that whole process so much faster. 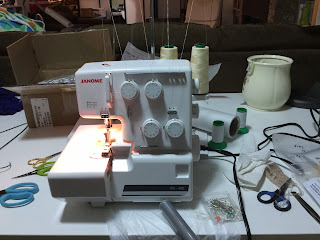 I didn't get an expensive one with lots of bells and whistles, just a basic Janome. Since it came home yesterday, I've done seven large receiving blankets, these are just three of them, 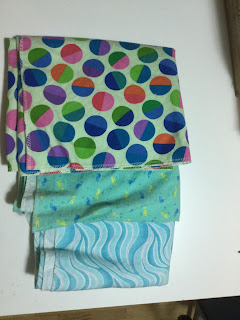 and a bunting bag, size small, for the yet-to-be-born grand baby. 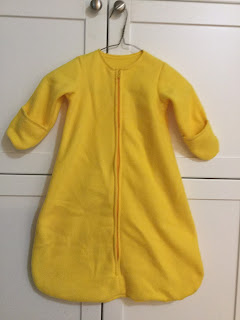 This is actually fleece that was left over from making pyjamas for Avery last year. So it is more or less bonus fabric. And there is more where this came from. I was going to start another one of these, but then I decided to sit down and share about it, before starting a new one. However, now that I look at the time, I think I'll put something on netflix, and work on La Passacaglia for the rest of the evening.