It’s supposed to be on Monday, not Tuesday, but last evening was spent watching the election results come in, rather than writing up a blog post. So I’ll do it today instead. I’ve got a couple of things going on up there. A finish, a start and a work in progress. The finish is a very modern, totally out of my box quilt, from a pattern called Black Tie Affair, 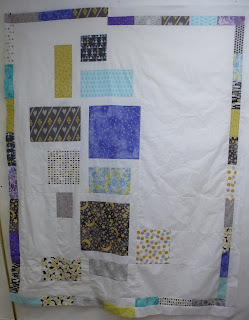 found in a Quiltmaker magazine. I can’t remember the exact issue date, and I’m too lazy to go upstairs and get it.This one is going into the waiting-to-be-quilted pile.
The work in progress  I’ve been playing around with is more of the large scale floral Disappearing Four Patch blocks that Jannette and I are doing. 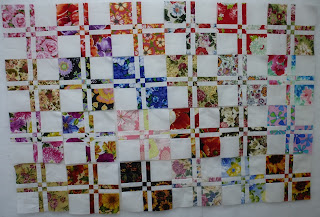 Somewhere along the line I have managed to change the size of the cuts not once, but twice. So there are three different sizes in this quilt. These are the smallest with the cuts finishing at 3/4 inches. These are going into the centre of the quilt. I did some playing around in Electric Quilt to see if I could come up with a design that would separate out all the different sizes, and I’ve shared it with Jannette, since she was also effected by the change in sizes. This is what I’ve come up with. 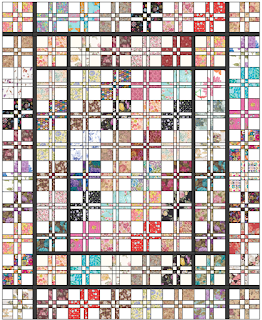 The different sizes are separated out by the dark sashes, which also act as a really neat design element.
The new start is another baby quilt for our grand daughter, expected in January. 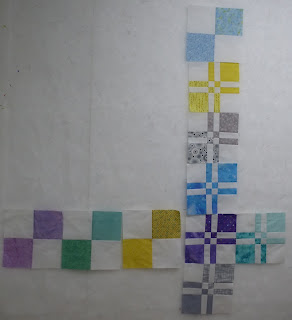 It is also Disappearing Four Patches, set in a more modern, minimalist way. I originally saw the quilt here, and really liked the layout. These are the colours that Becca has chosen. It’s not going to take long to finish this one.
Earlier today I loaded a new customer quilt and got it about halfway finished. 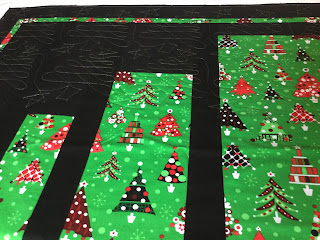 Here’s a look at it. And that’s been my day, full of fun quilty stuff. I’m going to link up with Connie’s Linky Tuesday and the Canadian sharing site the Needles and Thread Network for their Work in progress Wednesday.