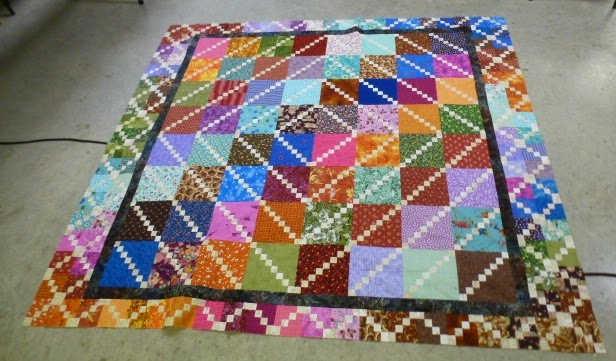 Today was the last Saturday of the year. I know I'm not really saying anything there that most people don't already know, but it sure is surprising to me just how fast it came around. This was my first year participating in the Rainbow Scrap Challenge. At this time last year, I decided that there were three projects I wanted to work on through the year. I had all kinds of lofty plans that I could work on a different project each Saturday of the month, which gave me a spare Saturday each month, just in case something happened and I fell behind. I don't know who thought I was kidding, besides myself, that I'd ever be able to keep up. However, the good news is that I did get one project to the finished top stage. This Triple Four Patch was finished up at our guild's sew-in days back in November. It's still waiting for quilting. 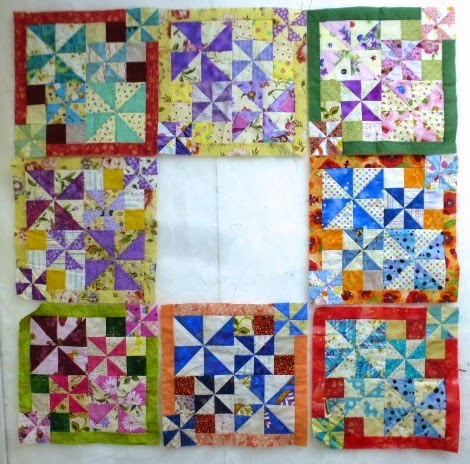 Another project that I was working on in the first part of the year were these pinwheels. Once the summer hit, and my sewing time decreased due to being outside more often, these blocks were left to languish. I'm thinking I have enough here to make a small child's quilt. Each block is 14 inches square. I'm just not quite sure what to do with that centre area. I don't particularly want to do another of these blocks. Any ideas out there for what to put in that centre section? 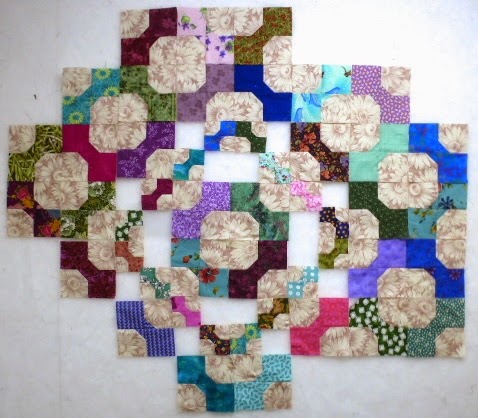 These Bow Ties were another project that I started at the beginning of last year. This is a bit of what the lay out will look like. These stalled because the colours for some of the months were too light to show up against the background fabric I'm using, so it too languished in the colour challenge box. I'm going to pick this one back up and work on it again this year. I think I might be a bit more flexible with the fabric choices for the bow ties this year, and go for multi-coloured prints containing the colour of the month, or at least put in some prints so that the colours flow better.

And then there are these nine patches, made from 1 1/2 inch squares and Kona white. These will work with the lighter colours that are chosen throughout the year that won't work with the bow ties. 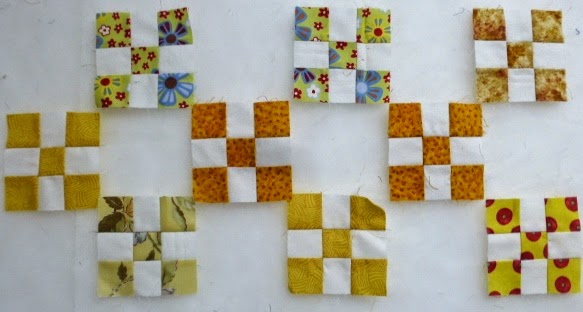 These nine patches will eventually end up in this quilt. I need 125 of them. Nine down and 116 to go.
I'm linking up to the last Scrap happy post of the year.