I've been sewing this week. I finished up, almost, the red triple four patches that I'm doing for the Scrappy colour challenge, and I also cut out and partially assembled the next row for our Canadiana Row quilt for the guild. That used a little bit of stash. I received in a lot more. 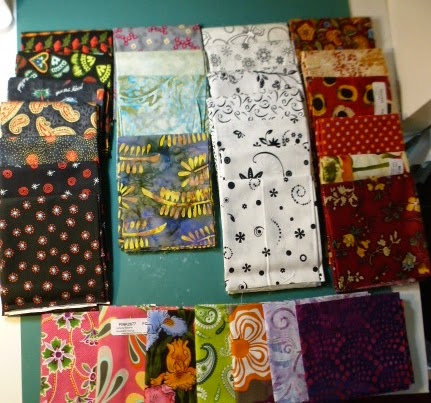 There are some blacks and reds and greys and golds that I'm collecting that are, right now at least, planned for a Lady of the Lake quilt that I want to do. The whites with blacks are for the +&x quilt that I started a while back. And the bottom row of fabrics are just because I liked them and thought they would make a pretty quilt for something, but I'm not sure what, just yet. There are a total of 31 fat quarters there, which add up to 7.75 yards. 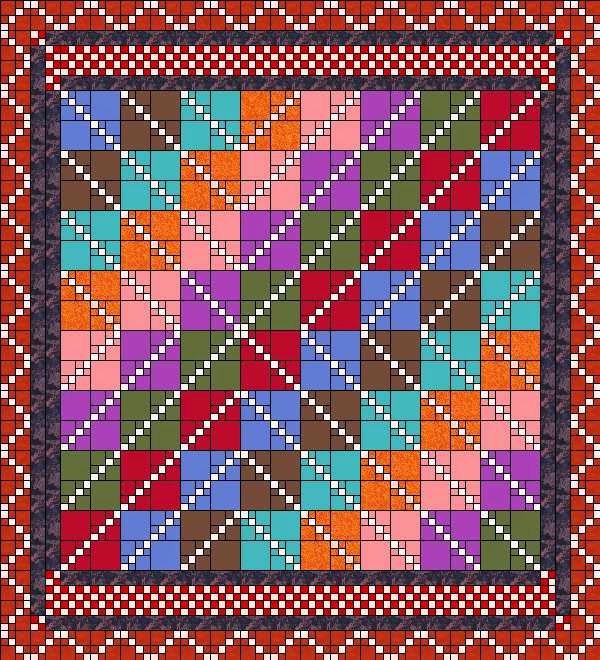 There isn't a lot else happening here today. Just some hanging out on the couch, and playing mindless games on the computer. I've also been playing in Electric Quilt, and I think I have a plan for my Scrappy Triple Four Patch quilt. Wanna see. or is that a silly question? The outer double four patch border will also be scrappy, as will the checker boards at the top and bottom of the quilt. I think it measures something like 80x100. It might end up with an outer plain border, just to stabilize it. That will depend on what I find in the stash, since I really don't want to have to purchase anything for it, since that would kinda defeat the purpose of the scrappy challenge.
I'm Hoping to have my Blooming Nine Patch off the wall, and put this one up this week. All that is left to do for this one is 8 orange blocks, and then I can start to assemble this one. I'm linking up to Judy's Stash Report.
Posted by Cathy at 15:06