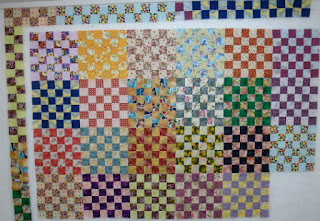 I have a whole pile of 36 patches and 4 patches up on the wall. It's interesting to see how different it looks in the picture that when looking at the real thing. For instance, looking at the picture I can see that the 36 patch square that is in the second row down and 3 in from the left isn't working. The contrast between the lights and darks in that square aren't as crisp as they should be. Maybe that one will end up on the back. I really like having the left over 4 patches acting as a border on it. I've been wondering what to do about a stop border between the body of the quilt and the four patches. Right now it's just the design wall showing through, but I think I like the way white looks in there. So maybe, instead of trying all kinds of different colours, I'll use white as the frame. I have 23 of the blocks done, although if I remove the one that's not working, that makes  22. Eight more to go and this baby is done. It is a perfect piece to work on while resting my brain from working on Meteor Shower. 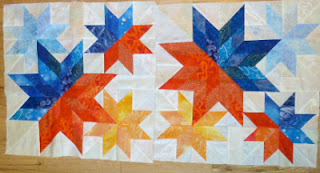 I have 2 blocks finished and a third about half done. The third one is all blues and oranges as well. The next ones will be pinks and oranges. It's complex, but I'm enjoying doing it. I'm linking up with Judy's Design Wall Monday, then I'm going to play with a few more 36 patches before going in to work this afternoon.
Posted by Cathy at 13:01