I decided yesterday to participate in the Friday Night Sew-in along with, at last count, 198 other bloggers. It is going to take a long time to go through all those posts to see what they were working on last night. I could ration them out....... maybe 10 or 20 at a time? It is so much fun to be able to see what other people are working on, and find new blogs to read. Anyway, I sewed yesterday like a mad woman. I had a leaders and enders project that was ready to go to the next stage. And then this weeks assignment for the Crumb along which was to sew the centre blocks together and add a border.

The first thing I started working on was the leader and ender quilt that I was working on, using the Charlevoix jelly roll that I ordered from the fat quarter shop quite a while ago. As soon as it came in the house, I cut it up, and started on it. Yesterday's job was to finish adding the triangles to the corners of the blocks. It took twice as long to do, since I double sewed them in order to be able to use the triangles that otherwise would have been discarded. 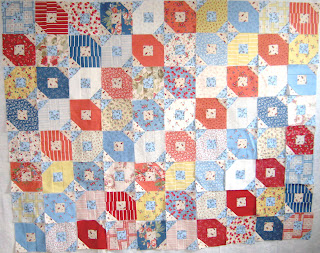 It is going to have a narrow border of some sort added to this, probably a green of some sort, which might mean a trip to the fabric store, depending on what I can find in my stash.. Then, I am going to use those bonus triangles as a border, and I have some 2 1/2 inch squares left of all the fabrics to use as another pieced border.  And I just now noticed, looking at the picture, that one of the squares in the bottom row is turned the wrong way. It's not sewn together yet, so that's an easy fix. This is a pattern from the book Scrap Basket Surprises by Kim Brackett called Beach Cottage.

Then there is the crumb along quilt. The centre is now all sewn together, and is waiting for a border of some sort. I haven't quite decided which fabric to use for it, other than I think it needs to be something fairly light. 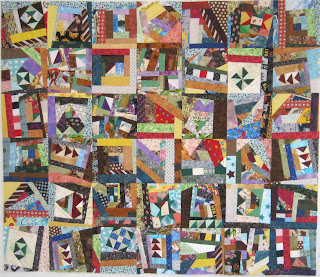 There seems to be a lot of darks in the centre of this, and I think it needs some lightening up. I'm also supposed to be working on the outer border blocks, of whatever kind I decide to use. Stars seem to be a popular choice, as are letters, either as an alphabet, or a name. I have a few ideas perking around in my brain, but nothing solidified as yet. I would love to keep working on these today, as well, but there are things around here needing doing. We have to put the trailer to bed for the year, and there is a gazebo in the back yard that needs its fabric taken down and stored. I'm limited by not being able to lift in what I can do to help in these tasks, but I'll do what I can. Which means, I'd best get off the computer, get some clothes on and do something.
Posted by Cathy at 13:29