In my travels around blog land lately, I've been noticing posts labeled Work in Progress Wednesday where people keep track of their various projects, in various categories, from actively working on, to not touched in years, or at least I have those categories. LOL! It seemed like a useful, if slightly daunting thing to do. So I've spent the last hour or so up in my studio rummaging around in boxes and drawers, taking inventory, trying to come up with an accurate picture of just what is up there. It's pretty bad, but not as bad as I had thought. I like the way Lee organizes her posts on the subject, so I'm going to loosely follow her format.

New projects started this week: none.

Ongoing projects:
My Tweets, a BOM hosted by Erin Russek. I'm a little behind on it, but not by much. This is July's block, and she hasn't posted August's yet. There is still quite a bit to do on this one though, and the new block is expected on Friday. The Rose Log Cabin is making good progress. I have the last ten of the green and cream squares started, and then there are 16 more rose blocks to do before this can be put together. Considering I only started it back in July, that's not bad. 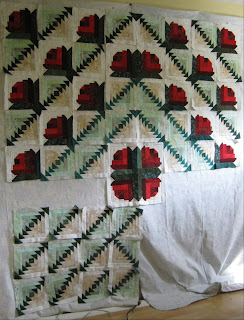 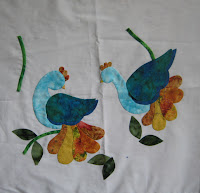 -16 patch and pinwheels. This one, if I make it exactly like the pattern, needs almost 400 4 patch squares. I'm up to almost 300 of them. It will shortly be time to move it into the active list.
-Beach Cottage from the Scrap Sensations book

Shakespeare in the Park

Round Robin in the Window
Spring Swap
Peas in a Pod
Double Duty
Dot to dot mystery quilt
Burning the Midnight Oil BOM
Pieceful Kwilter BOM
Orphan blocks
Buckeye Beauty. These last 2 are older than my blog, so I don't have pictures of them.

Active UFO's: I'm not going to do any more links with these. Most are listed over in the labels, if anyone is interested.

Nearly Dead UFO's these all pre-date this blog, so there aren't pictures of them.
Cosmati Stars
Double sided quilt as you go. The blocks are all done, and just need to be sewn together.
Pansies and Butterflies. This might end up as a table topper, so it might get added to the pile that needs to be quilted.
Hand pieced and Quilted compasses
Antique Rose Sampler. This one needs to have a lot of applique done on the borders.
In Bloom
Baltimore Applique. I have a lot of applique squares, of various sizes that need to go into a quilt. But I've had difficulty with a layout for them, so they sit in a box.
Stained Glass squares
Jacob's ladder.

Wow, that's quite the list, but it has been an extremely helpful and eye opening exercise.

There have also been so far this year,  8 complete finishes. That adds up to one per month, which is encouraging. So, now that I've spent a fair amount of time composing these lists, I can make an effort to finish some of these things, and keep track of where I have been, and where I am going. I would like to be able to say, and mean it, that I'll get one UFO a month done, but I know that isn't realistic. So instead, I'll do a current project and a UFO at the same time. I think I'll get back at Roll roll cotton boll, and see where I can get with it, also while working on the current project. I think I'm going to dedicate wednesdays, if I don't have to work, to UFO's. S, after I finish this extremely lengthy post, I'm off to drag out RRCB's box.