Well, that was an incredibly LONG week that just passed. I worked 6 out of the last 7 days. Hokey smokes, but that is hard to do. The good news is that I have the next 4 days off. Today is going to be spent resting, and reading blogs, and maybe doing some playing. Mondays are always a good day to blog surf, since there is always plenty to see and read at Judy's Patchwork Times when she hosts Design Wall Mondays. She's been hosting as well, since the beginning of the year, a challenge to finish off our UFO"s. I haven't been able to do any of it in the past couple of months, due to the arrival of this perfectly sweet grandson, our Avery.  (Wasn't that a good way to have an excuse to slip in a picture of him? LOL) 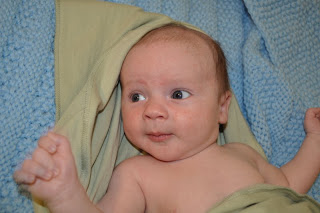 But, I started thinking about that challenge in the last week or so. Judy pulled the number "2" for July, so just out of curiosity, I checked out what I had listed as my #2. It was my old friend/enemy the Double Wedding Ring. So, I hauled it out of its box, and hung it up, just to get an idea of what is still left to do on it. 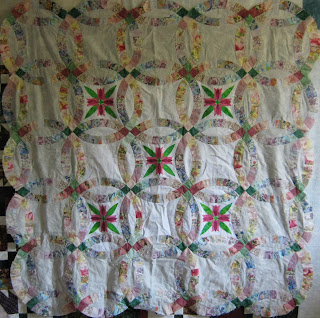 It certainly isn't a very good picture of it, all wrinkled, and partially in shadow. When I put it away last, I was trying to figure out how I was going to applique the outer curves of the quilt down to the borders that are to go on next. Since then, I learned how to do the starch and press over non-melt mylar method of finishing the edges of applique, and the glue baste. And that is just what this quilt was waiting for. So, in order to progress further, I need to make a finished arc shape out of some mylar, and get pressing the edges. At least I now have a direction to go with this, which is more than I had at the beginning of today. How much I'll actually get done on it............. that's another question. Today, in addition to resting, I want to see if I can't finish quilting the Crazy Curves that is on my machine. It is strange how much difference quilting can make. When I finished piecing this quilt, I really didn't like it at all. Now, with the quilting almost done, it is quite growing on me. I'll post a pic when it is done. TTFN, I'm off to surf.
Posted by Cathy at 11:55