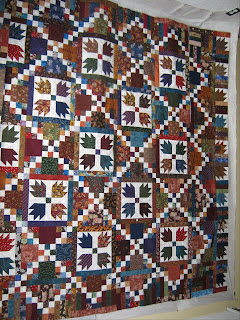 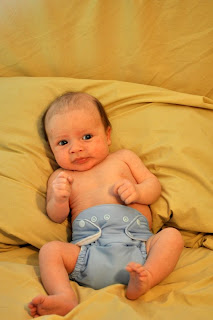 Bear Tracks is up on my wall, and it is so close to being finished.  Right now, it is actually sideways. the bear paw blocks go on the top and bottom when it is finished. And that is all that is left to do, sewing the bear paw blocks together, and the attaching them to the quilt. The pattern shows to add 5 inch blocks on top of the bear paw blocks at the edge, but, if I end up putting them on,  I think I'm going to cut those in half. This thing is huge already, 90x100. But I think it might need something on the other side of those paws. It looks unfinished with the cream background on the edge. So, I guess that's another thing to add before it is finished. It's going to have to wait, though. We're going up to see Noel and Laurie and Avery on Wednesday afternoon, if I can extend the reservation on our campsite. If not, we'll be going up thursday for the weekend.


She's had a chance to use the diapers for a while now, and has expressed which ones work best, so I've promised her I'll finish the rest and bring them up with us. There are 1 dozen of the cloth diapers, and 6 of the pocket diapers left to do, plus finishing the edges of the inserts. So that is my task for the next few days, or however long it takes to get them done. If the weather stays nice today, I'm going to take my sewing machine outside and work on them there. Here's a pic of little Avery in one of the diapers.

There are more design walls to see over at Judy's Patchwork Times
If you have some time, go take a look.
Posted by Cathy at 12:49