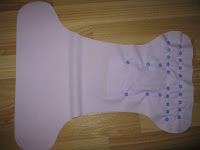 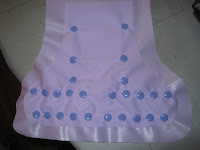 Wow, it's been almost 2 weeks since I posted anything. I've been busy with secret baby projects, as well as diapers. There are now 2 dozen of the cloth diapers done, and 4 of the pocket diapers, which are quite labour intensive. I was going to make then all the same, but I've discovered that the ones like the product pictured here, aren't wide enough to cover the cloth diapers. So I'll make the pocket diapers, and the covers differently. The first job was to put in all those snaps. I bought a snap press, and it's a great thing, except that I don't have the upper body strength to use it properly, so my poor husband got recruited.  I told him that it was his contribution to all the sewing and the shower gifts. LOL 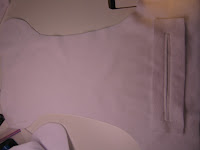 The next step was to create a cut in the lining of the diaper to allow for the insert. It got sewn to the wrong side of the fabric, cut in between the lines of stitching, turned to the wrong side, and stitched in place so that it won't flip back out during use 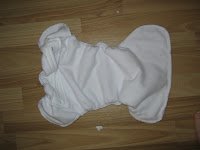 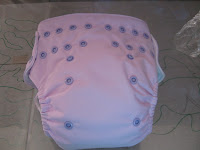 Then the lining got stitched to the right side of the water proof fabric, and elastic added to the back and the legs. Turn it right sides out, and top stitch the whole thing. The snaps are what make it so adjustable for size. They go across the waist for adjusting there, as well as down the rise of the diaper so that it can be shortened and lengthened as the 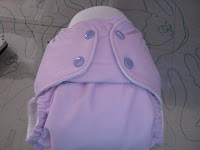 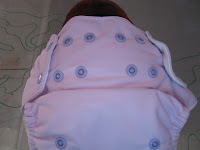 baby grows. The baby shower is a
week from today, and I was hoping
to have them done by then, which
won't happen, if I continue to sit
here in front of the TV, playing on
the computer. I'll have lots of
pictures of lots of stuff after
the shower is over